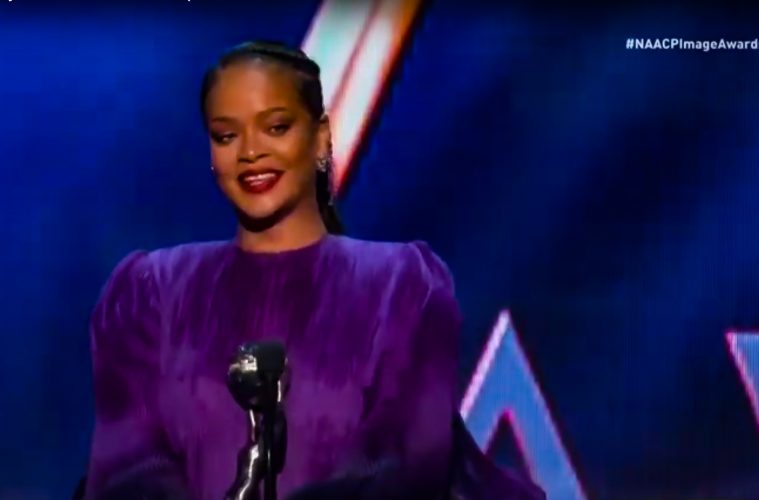 When Rihanna steps in front of a microphone, you know she’s going to represent the black community and did not disappoint with her speech at the 51st Annual NAACP  Image Awards Saturday.

During her acceptance speech, Robyn Rihanna Fenty magnified the issues with police brutality that deeply affect the black community. This definitely isn’t her first time speaking up about black experiences and won’t be her last.

In case you’ve been living under a rock for the past 15 years, here are a few of our favorite times that the 32-year-old Bajan singer used her voice to magnify the black experience.

1. Rih Rih Invites People To “Pull Up” For Fight Against Injustice

The 32-year-old Bajan Grammy Award winning singer, actress, businesswoman and philanthropist was given one of the top honors at the 51st Annual Image Awards, the President’s Award. The award was given to Rihanna for her philanthropic efforts with her nonprofit organization, The Clara Lionel Foundation (CLF), which funds educational opportunities and emergency response programs globally.

The singer suggested that people need to invite allies from different races, religions and genders into their fight.

“How many of us in this room have colleagues and partners and friends from other races, sexes, religions? Show of hands,” she asked. “Well then, they want to break bread with you, right? They like you?”

She added, “Well then, this is their problem, too. So when we’re marching and protesting and posting about the Michael Brown, Jr.s and the Atatiana Jeffersons of the world, tell your friends to pull up.”

2. Ms. Fenty Refuses To Sell Out

When she spoke to Vogue   last year, Rihanna said she wouldn’t perform at the Super Bowl because she didn’t want to sell out. The NFL has blackballed former quarterback Colin Kaepernick for protesting police brutality by kneeling during the National Anthem.

Rihanna has drawn her line in the sand publicly, refusing to perform for the organization.

“I couldn’t dare do that. For what? Who gains from that,” she asked. “Not my people. I just couldn’t be a sellout.”

“I couldn’t be an enabler,” she said. “There’s things within that organization that I do not agree with at all, and I was not about to go and be of service to them in any way.”

She called the treatment of the black community devastating.

“This is just not normal. That should never, ever be normal,” she said. “And the fact that it’s classified as something different because of the color of their skin? It’s a slap in the face. It’s completely racist.”

3. Rihanna Puts Her Money Where Her Mouth

Rihanna has a nonprofit organization foundation that has donated millions to advance black lives globally since it began in 2012. The Clara Lionel Foundation, named after her grandparents Clara and Lionel Braithwaite, donated $1 Million to help rebuild the Bahamas last year.

The year before that, the foundation supported girls in Malawi by helping them go to school and get jobs once they graduate. The Clara Lionel Foundation also reconstructed schools in Senegal and helped create gardens to solve issues with food insecurity.

Rihanna says this philanthropic mindset comes from her grandmother.

“My grandmother taught me that it only takes one person, doing one thing, to help someone else,” she said at her 2019 Diamond Ball. “It doesn’t matter if it’s one dollar or a million. It’s about the collective joining forces to make a difference.”