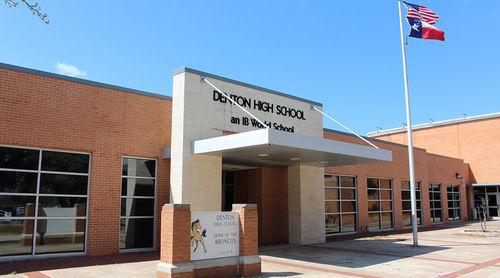 The assistant principal of Denton High School in Texas, Howard Palmer, has been placed on leave after he was caught on tape using telling  black students to “turn off that nigger music.”

The Denton Record Chronicle reported Monday that an investigation was underway into the actions of Palmer following the incident which occurred April 26. LaTasia Woodard said her friend overheard Palmer using the slur.

Today, an administrator by the name of Howard Palmer told two African American students at Denton High School to “turn down that nigger music” and when confronted by a parent switched the context but still admitted to saying it. Please retweet.‼️‼️ attached is proof. pic.twitter.com/NXjtQrIsnu

“I thought he was joking,” Woodard said. “That’s when I came down here because I was outraged that a word like that would come out of your mouth—a person in a position of power who’s not only supposed to be directing people but also you’re in charge of giving punishment and directing the school. And so, for you to be in charge of all that and feel some kind of way towards rap music?”

Woodward called her father, Prince Njoku, who came down to the school. He filmed his confrontation with Palmer who was not aware he was being recorded which can be viewed here.

Palmer disputed that he used the slur in a derogatory fashion.

“I’ll tell you the exact words,” Palmer replied. “I said ‘turn that music down. I don’t want to hear the word nigger in my office.’”

Njoku was not satisfied by his response.

“That word shouldn’t even be coming out of your mouth, Mr. Palmer,” Njoku said. “There’s no explanation…You want me to be fine with you using that expletive to a student…What are we doing here?”

A spokesperson for the district confirmed he has been on administrative  leave since.

“He’s not been on campus in well over a week,” Zwahr said.

The video of Palmer using the racial slur was posted to social media. Zwahr said that she and district spokesman Derrick Jackson declined to watch it.

“I don’t really care to watch the video if what people are telling me is true,” Zwahr said.

All of their information from the recording was second hand.

“All we know is that if something like that is out there, that’s not what we’re about, so I don’t know that it’s important that we watch the video,” Zwahr said.

Texas is a one party consent state where only one party needs to be aware of the recording. Njoku felt it was necessary to have their encounter taped as he expected backlash.

“It was just to protect myself,” Njoku said. “I just wanted proof that I went in there in a pretty much calm and collected manner.”