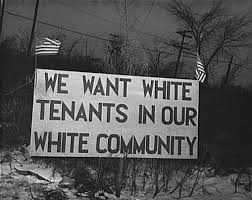 White Flight: Then and Today

Beginning in the 1950’s millions of white Americans escaped major cities in exchange for the suburbs. “There goes the neighborhood,” was a catch phrase coined in the ’60s which could not have better reflected the sentiment of segregation at the time. A number of white homeowners feared that the presence of minorities would cause their neighborhood to become less valuable. Their leavings were assisted by the new development of highways and major causeways. But there was an additional factor, one motivated by racial tensions, as different communities and peoples began to integrate.

White exodus to the suburbs overlapped with mass African American movement away from the rural South. From 1940 to 1970, four million African Americans settled in industrial cities in the North and West. As black citizens moved into more urban cities, the fraction of the white population in Northern and Western metropolises was nearly cut in half. Today, a new type of “white flight” is occurring all around us.

Historically, the model of segregation was typically white suburbs and black city centers. Today, in contrast, more white residents are living in city centers. Meanwhile, other white residents are relocating to even more distant suburbs known as the exurbs. Current patterns suggest a higher number of minorities are now relocating to the suburbs. In fact, when looking at metropolitan areas, more minorities are currently living in surrounding neighborhoods and suburbs than in the city center directly.

Using 2000-2010 census data, studies found that of 27,891 Census tracts examined, 3,252 experienced “white flight” at a rate 25 percent or higher of its white population choosing to relocate. These tracts experienced “an average magnitude loss of 40 percent of the original white population.” The findings also indicated that racial white flight may be motivated to an even greater extent in middle-class, suburban neighborhoods than urban ones. Meanwhile more and more whites are relocating to further and further exurbs.

The subject matter itself leaves one to wonder: have whites left previously primarily white-dominated areas for racial reasons or for economic ones?

Certain fractions of research claim that Caucasian residents abandon neighborhoods growing in diversity for racial motives. These citizens may be uncomfortable with the racial division of their changing neighborhoods. For a number of urban whites, many of which have never socialized with a black family, relocating to suburbs was an economic decision. In contrast, cities were often at the whim of poverty, immigrants, migrants and resources were not as readily available. As more minorities and immigrants joined the middle class, they slowly began to establish themselves in strong suburban areas.

On the opposite side of the argument are experts that debate the overall extent that race influences white residents to relocate. Such researchers claim that many of these areas are typically disadvantaged, in a manner that has an effect on all residents, causing individuals to avoid specific areas or districts with high levels of instability, poverty, crime. In 1940, nearly a third of white households, situated near a primarily black area, expressed concerns over the area’s changes and indicated it as motivation to relocate. Furthermore, these households fled the city area at very high rates, contributing to a massive white exodus. In fact, from 1940 to 1970, on average, for every African American arrival, two Caucasians left the central city. When black people moved in, white people moved out.

These symptoms are still a reality plaguing the movements of white flight. A tipping point for when Caucasians typically choose to relocate has even been determined. White flight becomes more likely in middle-class neighborhoods when the presence of ethnic minorities exceeds 21%. The surge in racially motived relocation has been dubbed, a “triumph of racist social engineering”.  There are new forms of segregation taking place and this continuing trend has a number of consequences for an increasingly multicultural America, none of them positive. Much of America would like to believe the nation has changed since the 1950’s, however, recent patterns in relocation and exodus remind us that the past is never too far away.