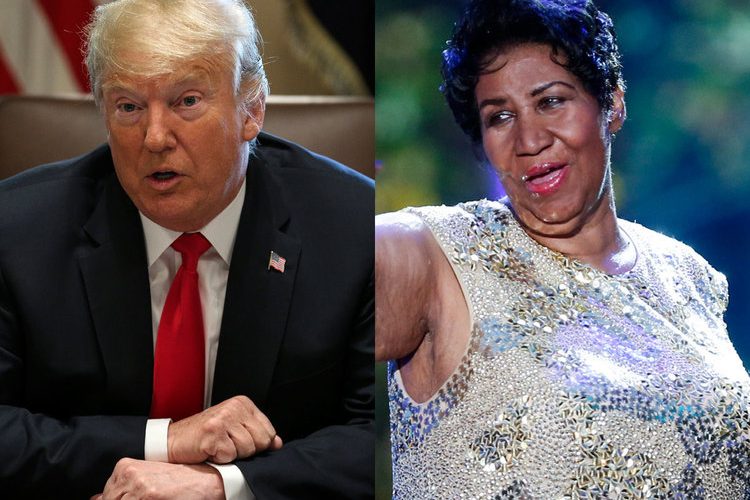 As you’ve heard by now from recent news and our last article by Tarik Presley, Aretha Franklin, the Queen of soul and a civil rights idol, unfortunately passed away Thursday at the age of 76. All across the social media, news websites and TV, celebrities and fans gave heart felt tributes and shared loving memories to show respect for her contributions to the world. Though one homage in particular  turned heads and raised eyebrows.

I want to begin today by expressing my condolences to the family of a person I knew well. She worked for me on numerous occasions. She was terrific — Aretha Franklin — on her passing. She brought joy to millions of lives and her extraordinary legacy will thrive and inspire many generations to come. She was given a great gift from God — her voice, and she used to well. People loved Aretha. She was a special woman. So just want to pass on my warmest best wishes and sympathies to her family

While it is definitely true that Ms. Franklin preformed at Trump’s Castle Casino and Trump Taj Mahal in the 80’s and 90’s, the fact that trump chose the words “worked for me” for this civil rights activist hits a little to close to slavery.

When Trump says Aretha “worked for him many times,” he says with the arrogance of a slave owner…

🔥🔥🔥 @realDonaldTrump on Aretha Franklin: “She worked for me on numerous occasions.” WTF does that even mean? Did he own her or something?!! The guy has zero RESPECT. What capacity did she “work” for him??? 🔥🔥🔥https://t.co/oIypIm5SmS

Trump’s comment showed ignorance not only through the fact that her performing at his hotel was hardly an employment relationship, it showed no relevance  on the day of her death. David Ritz, a man who spent years learning about Franklin for his biography “Respect: The Life of Aretha Franklin,” expressed, “I find it disturbing and sad, and a reflection of his endless narcissism”.

Trumps comments of Franklin working for him easily set his condolences apart from other tributes to the soul singer. Barack Obama called Franklin “a glimpse of divine” and Clinton stated that “Like people all around the world, Hillary and I are thinking about Aretha Franklin tonight.” The two former presidents both had the honor of Franklin performing for them. Franklin was a frequent guest of the white house and in 2015 when performing “natural woman” at the Kennedy center honors, she brought Barack Obama to tears.

Aretha helped define the American experience. In her voice, we could feel our history, all of it and in every shade—our power and our pain, our darkness and our light, our quest for redemption and our hard-won respect. May the Queen of Soul rest in eternal peace. pic.twitter.com/bfASqKlLc5

While many people beautifully shared their feelings on the passing of Ms. Franklin, Trump’s comments only correlated with his usually demeaning language about women and minorities, though not as harsh. Trump somehow, made the topic about himself and and tried to claim there was a bond between him and Ms. Franklin. This is highly doubtful being that Franklin was a great allegiance to the Democratic party, a huge Obama supporter, and a wonderful civil rights activist.