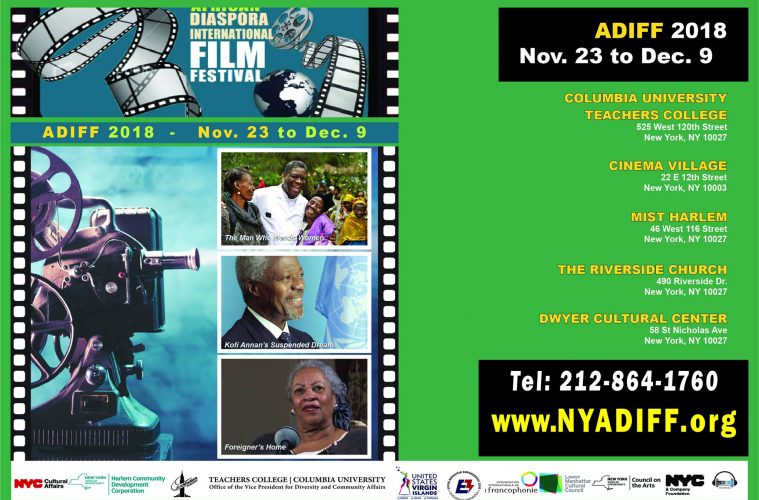 From the release of movies like Black Panther and A Wrinkle in Time, it would seem that Hollywood is finally listening to the calls for diversity and the importance of producing films with black actors and directors.

As Hollywood tries to catch up, the African Diaspora International Film Festival (ADIFF) continues to create a space that promotes the work of Africans and people of African descent.

The ADIFF is an annual event that aims to ‘redesign the Black cinema experience, and strengthen the role of African and African descent directors in contemporary world cinema.’


This year the festival celebrates its 26th anniversary and will be screening 61 films from 41 countries, 27 of which will be making their world, US, and New York debut.

The films and documentaries being showcased touch on different issues, topics, and notable figures.  This year’s documentaries will feature the stories of men and women who had a major impact on society, such as Miriam Makeba, Kofi Annan, Sandra Bland, and Toni Morrison.

The ADIFF will not be left behind on the discussion of this year’s most talked about movie, ‘Black Panther,’ they will be hosting the program ‘Identity Politics & Black Panther, the film.’ The program will feature discussions and films that connect to ‘Black Panther’ and the issues that impact black communities all over the world.

The festival will begin on Nov. 23 and will run until the 9th of December. Screenings for the festival will take place at the Teachers College, Columbia University, Cinema Village, Riverside Church, The Dwyer Cultural Center, and MIST Harlem.

Passes to the event and the schedule for the festival can be located here. Follow us on our social media pages to stay up to date on our coverage of the festival and to read our reviews of different films.