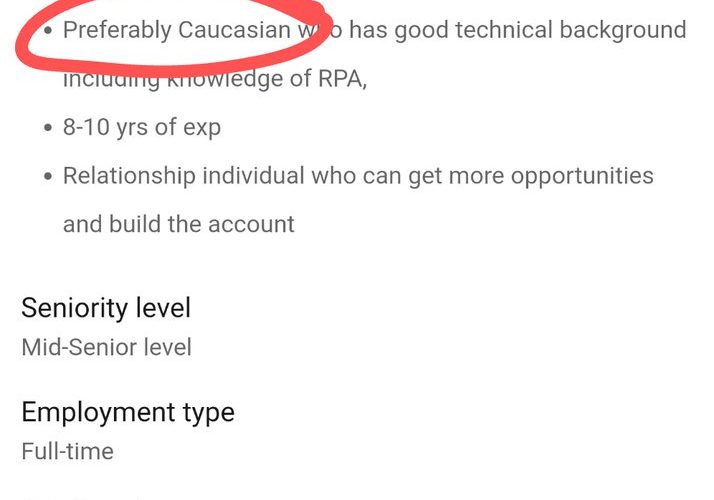 Tech Company Cynet Systems is getting called out on social media for stating it prefers hiring Caucasians and female candidates on a Sunday job posting on LinkedIn.

The Virginia-based tech firm is recruiting for a mid-senior level business development position in Tampa, FL, and the company hiring policies are ‘Caucasians Preferred’ and another job specifically requesting ‘Female Candidate Only’ in its home state.

This racist job post on LinkedIn was posted on Twitter. When the public reacted to the company’s application, Cynet Systems acknowledged its specific qualifications was an offensive.

Uh, hey @cynetjobs – what's with this?

How could you POSSIBLY think that's okay? pic.twitter.com/DPWzpgXqqE

“You said the quiet part out loud”

In a statement from Co-CEO Ashwani Mayur, the employees who were involved have been fired and stressed the job post was written was against its policy.

“We understand why some may have been upset seeing this ed listing, because we were too. It is a long-standing policy for our company to refuse any request to list jobs only seeking candidates of any specific ethnicity, gender, or other inappropriate restrictions, and we will turn clients down if they demand requirements of this type be included,” Mayur.

Mayur used his Indian race card to deny all accountability for this incident, stating Cynet System “is proud to be an immensely diverse company,”

The creepy job “female candidate only” post was advertised in the company’s Herndon, Virginia location was taken down without any explanation.

“Discrimination of any kind is against our policies and we have no tolerance for it on our platform,” according to the company’s statement. “We have dedicated teams and technical measures in place to identify content that violates our policies; they took quick action to remove the job posting.”