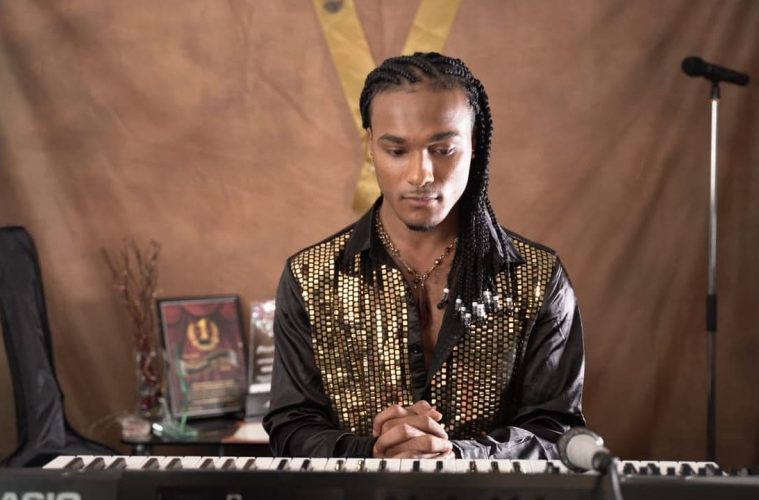 After his victorious Take it to the Streets tour last year in Westminster and several performances in 2022, British multi-award-winning R&B Soul crooner, actor and entrepreneur, Leyton Benta is proud to announce his first-ever documentary.

Speaking exclusively with Nu Origins, the songwriter said: ‘’I have a very good friend his name is Petros Gilazgi, he is like a brother, and he reached out to me just before the end of last year and he said to me, Leyton I think it is time that your story should get out there.’’ Coincidentally, Benta was thinking that now is the appropriate time to showcase his story, and words of encouragement from videographer, Petros Gilazgi has been a staunch supporter of Benta as an entertainer and social ambassador.

Without wasting little time, Petros Gilazgi who is the founder of Gilazgi Productions, and Leyton Benta were propelled to begin filming for Benta’s new documentary and once the clocks welcomed the world into 2022, filming commenced promptly thereafter. Leyton is very assiduous and as a result, is very discerning about who he works with when it comes to outpouring his creativity for consumption. Astonishingly, the two-hour and 18-minute documentary was completed in just two days. The short completion required a strong commitment from both creatives. ‘’It was literally, long days and was actually filmed at my home in Wembley’’ revealed Benta.

Describing the process of the documentary, Benta likens it to ‘’being spiritually naked. What I mean by that is that you’re reading so much more about your journey. The ins and outs of so many things that have happened since I started. I was very emotional during those two days to me because it was so surreal to me because I said to myself; wow there are people that are now actually finally going to be receiving what I feel is needed.’’

To say the documentary is divulging would be an understatement. The documentary not only narrates Leyton Benta’s musical trajectory but addresses his childhood adversities and challenges such as being bullied as a child and being vulnerable to sexual exploitation. In the documentary, Benta speaks candidly about the music industry, corruption, liars, and manipulators to raise awareness and dispel the alluring temptations and promises of the music industry.

The artist was just between the ages of 13 to 25 when 5 to 6 record labels were enticing him with lucrative deals. Although he was surrounded by disingenuous people, Benta fortunately had a genuine team in his remit. With a maturity exceeding his biological age, a young Leyton Benta declined record deals offers because he was not prepared to compromise his message and content.  He describes his new documentary as ‘’unconditional love’’ as the objective is to ‘’expel all consciousness and awareness by inviting people in with all the narratives that existent in this world that aren’t really what people assume it is.’’

As a performer, Benta has accomplished ten accolades. Six of which have been attained within the last four years when I first interviewed the artist.

Two ceremonies for his most recent accolades are due to take place by the close of 2022. The first ceremony will occur on Saturday 12th of November for the Gentlemen of Heart awards.  The award is in recognition of Leyton Benta’s contribution to music and his commitment to raising social awareness about the music industry, his career progression, and his childhood experiences which he uses to inspire change. Speaking about the accolade, the singer said: ‘’I am very humbled because of it. I am also an ambassador representing men in the UK with this Gentleman of Heart. It is basically those who not only just lead through their hearts but are leaving a foundation that breaks the norm.’’

Since Nu Origins last spoke with Leyton Benta, he has had his share of tribulations with the music industry which he is not afraid to discuss. ‘’When you are outspoken, you become a threat because you’re not one of these people who will just remain silent. You are one of these people who generally care about the world, and you want to speak for the world, and you want to save the world and improve the world in a way that you can contribute’’ says the singer.

Leyton Benta’s second accolade for 2022 is for the Unsung Hero Award which will take place on Saturday 10th of December. ‘’And that is also still to do with a humanitarian award along with what I have been contributing to the music industry. There have been people who have been watching closely and sometimes they may not say anything, but those who watch from afar see the depth more than the people sometimes that are close’’ argues Benta.

In 2023, Leyton will be releasing a new album Speak On Out which he said: ‘’Will be a big experience on human consciousness.’’

On Saturday, November 12th at 17:30 GMT, Leyton Benta will formally receive an accolade from the Gentlemen of Heart Awards at the prestigious Leonardo Royal Hotel Tower Bridge in London. Leyton Benta’s second accolade for 2022 will be bestowed on him at the Unsung Hero Awards which will take place on December 10th. 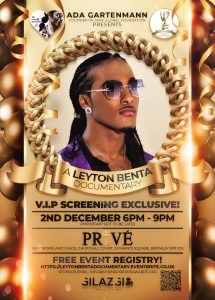 Leyton Benta wishes to express his gratitude to the founder of the She Inspires Me Awards, Ada Gartenmann for organising the screening of Leyton Benta’s new documentary which will premiere at the Prive Lounge Bar, St Mark’s Square in Bromley, London/Kent on Friday 2nd December. To reserve your free seat, visit: Eventbrite.