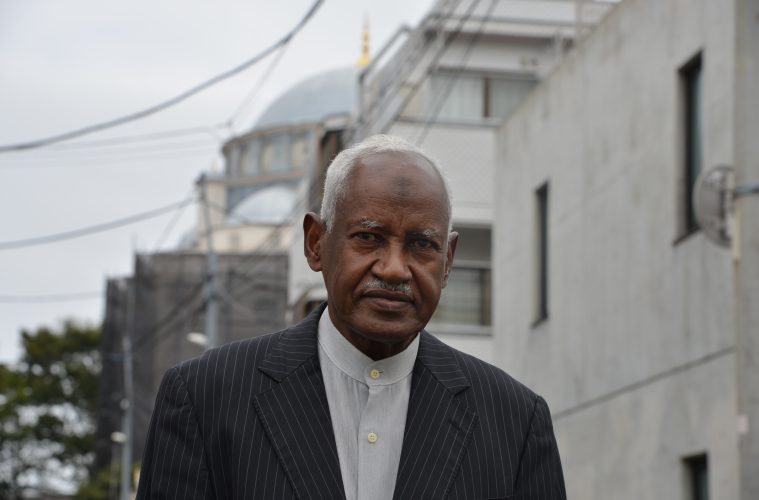 Relations between Japan and the Arab and Muslim states have developed in a steady manner both in scope and depth, the number of Muslims living in Japan, though small, has more than doubled in the past decade, from 110,000 in 2010 to 230,000 at the end of 2019 (including as many as 50,000 Japanese converts), according to Tanada Hirofumi of Waseda University

NU Origins met Dr. Moussa Mohammad Omar who arrived in Japan from Sudan in 1970 at YUAI International Islamic School which was launched on July 2016 with the collaborations between the FGA Education Foundation and the Islamic Centre of Japan. Next the Turkish mosque opened in 1938 (as the first in Japan).

I went back in time with him to the student who arrived in this new world from overseas on a journey that would end up defining his life, a trip that left the then architecture student enamoured by the country and its people.

I asked him about the story behind being the first Sudanese student in Japan he replied: “the credit to this goes to the Aswan High Dam in Egypt as when they built it, they deported people from both banks of the Nile river in the Sudanese side about 150 KM to the south to new Halfa city, the deported people found new homes built with Cement and iron not from mud as they used to for thousands of years. For them, this was completely unacceptable as it’s not environment friendly, from inside It’s hot in the summer and cold in the winter and they were terrified of the sound of rain (they didn’t use to have rain before). At that time, I was studying architecture, and Sudan university was a branch of London university with British lecturers and we studied everything related to the Cottage houses and the churches but nothing about Sudan or Islamic architecture!”. here he mentions that he started to be interested in Islamic architecture and other parts of the world’s new movements and methods inspired by Hassan Fathy and his village in Egypt, This s when he found examples in a Japanese magazine about the matter, where he also started to be interested in the traditional Japanese architecture that has a characterize type, soon after he decided to establish the Sudanese Japanese friendship association in 1964 in Khartoum.

At that time the normal route for Sudanese students is to work at the government that sends students to Britain to continue their studies. But the Japanese embassy opened the door for scholarships, and he was among the two who got it between 50 applied. He adds: “I was supposed to arrive here in 1969 but because of the many protests in Japan against renewing the peace treaty with the United States I was one year late. I arrived in Japan in April 1970 as the first Sudanese student, at that year the Sudanese government decided to close its embassy in Tokyo. One of the embassy staff started to send newcomers to me, I luckily learned the Japanese language fast, and soon after I became the center of the Sudanese activism in Tokyo”.

In 1973 former president of Sudan Jaafar Nimeiry reopened the embassy Dr. Omar said, and added: ”I was appointed as an attaché and asked to prepare a place for the embassy, so I got a loan from a Japanese company and rented two buildings and when the ambassador arrived I asked them not to be a diplomate as I wanted to do other things in studying and also my activities in the mosque where I continued working until I was appointed as an ambassador in 1990 until 1994 then I returned to Sudan and asked the permission to leave with a condition to be available whenever they need me. I was appointed again from 2003 until 2006 when I reached the retirement age” He comments: “My work as an ambassador was limiting me in my over 50 years in this country, I still don’t feel comfortable when they call me Mr. Ambassador”.

Dr. Omar is also the founder of the association of Japanese speakers’ ambassadors in 1990 starting with nine ambassadors from Britain, Germany, Belgium, the USA, China, Russia (Soviet Union), Korea, and Peru among 135 ambassadors to Japan. He adds: “I also witnessed the establishment of the Arabic speakers’ students in the seventieth founded by a medical student from Iraq, we organized many exhibitions and different activities and as usual the Arab-Arab relationships negatively affects this kind of activities, we were always trying to be detached to the Arab world and say that we are now here in Japan and have to benefit from our location here. The biggest numbers of Arabs here are from Egypt and Morocco”.

When I asked him what you learned from Japan in half a century he said: “Arigatōgozaimasu” the word (Thank you) as who doesn’t thank people doesn’t thank god… I learned the importance of organizing time, treating others with respect, the apologizing culture here, when you jump into a train you hear tens of apology words if the train is one minute late, and always the thank you in the writing of letters, or when you enter a shop (whether you bought something or you didn’t). There is a personal safety here you can not find anywhere else. You can walk anywhere any time a night as a woman without any kind of worrying or fear.

Regarding Japanese relations with others, Dr. Omar said that japan looks into what is beyond their island, the nearest for them perhaps their knowledge of the United States, they have strained relations with China and Korea, and Taiwan, unfortunately, Japan doesn’t have a friend nearby. It is a nation that works and is wealthy but very poor in the primary resources and this is what drives them to work and innovate by bringing new ideas. You can’t find this anywhere but here in Japan. He adds we must learn from them “Necessity is the mother of invention”

And as for some advice for anyone who would like to live in Japan he says: “First thing is that you have to learn Japanese before you arrive and spend a lot of time learning it. As for students, I would say go for higher education as any other stages could be difficult for a non-Japanese speaker, even those who come to find a job they have to learn Japanese”.