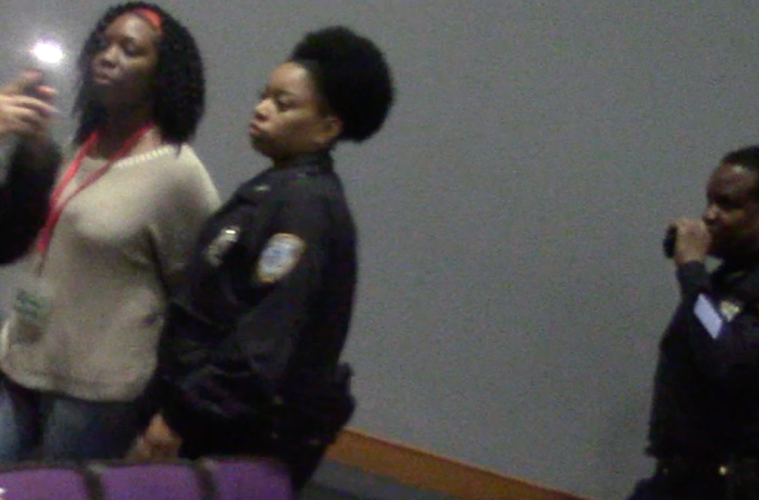 The Democrats like Councilwoman Laurie Cumbo (D-Crown Heights) are no longer at ease among their constituents, or at least they have to be on the lookout for political opportunists.

On April 30, Cumbo was scheduled to hold a Community Board 9 meeting at Medgar Evers College’s auditorium, but she was confronted by two protesters, one of whom is a student attending the college.

Nu Origins previously stated a MEC student was arrested for protesting Cumbo, but the publication has since learned that the student was too aggressive and deemed hostile.

The student in question charged at Cumbo, stood inches from the Brooklyn politician, yelled at the top of the student’s lungs directly in Cumbo’s face at a CB9 meeting held at the student’s college.

According to the Cumbo administration, the student is a self-appointed head of Student Government Association, who either ran unopposed or never officially ran. The administration is not clear.

Nu Origins has reached out to MEC’s SGA for further clarification as to who the current student president is and who the escorted student was.

The administration also claims the student was accompanied by a community activist named Alicia Boyd, founder of an organization known as The Movement to Protect the People (MTOPP), and they were the only two people causing a disruption.

The administration is under the impression that the two are associates, but Boyd told Nu Origins she knows the MEC student, but was unable to identify her name at the time of this report.

The student, according to Cumbo administration and campus police, has a reputation for her erratic behavior.

Nu Origins has reached out to MEC’s SGA for further clarification who is the current student president and who was the escorted student.

Cumbo was slated to talk about important matters, including New York City Housing Authority (NYCHA)’s unlivable conditions from lead paint poisoning and a lack of heat and hot water in our NYCHA developments, to residents facing eminent evictions and forcible removals from Third Party Transfers.

According to Boyd, the student was arrested before she decided to hit record, and half of the video shows Boyd resisting two police officers and one elderly woman who wanted a civil discussion.

Boyd said the student is the president of SGA and is a regular at these town hall meetings.

Boyd also said Cumbo has been ignoring her for more than a year, and she decided to make a scene for attention.

According to Boyd, she was not “arrested” because she was in the back row and told police officers she has the right to yell from a safe distance.

Despite her having a reputation of lying about opposing new development in Crown Heights, the Cumbo administration asserts that its commitment toward budget negotiations, pay parity for daycare workers, summer camp opportunities for middle school students, addressing a recent shooting in the newly renovated Elijah Stroud Playground, and preventing our rent laws from expiring are what constituents really care about.

In addition to April’s disruption, the Cumbo administration blamed MTOPP for interfering in Cumbo’s attempt to make housing affordable.

“Over the last six years, MTOPP has consistently disrupted any meaningful conversations or plans to address the housing crisis in Crown Heights. The organization has blocked every attempt to build any affordable housing in the community,” the Cumbo administration told Nu Origins. “This does not help the housing crisis, but rather exacerbates the rates of gentrification as more people continue to move into a community with limited housing.”

Boyd called Cumbo a sellout, claiming Cumbo is going to be responsible for thousands of ostensibly African-American residents to moving of Crown Heights houses in favor of those, in her words, who earn $100,000 and want to live there.

“One of the issues that people are having at that meeting was the fact that if you are targeting people who make a $100,000, [sic] or what race would this target be? And we all know that white people make more money than black people because of institutional racism,” Boyd said. “There’s always a black person that will sell you out, that’s why they’re called sellouts.”

According to Boyd’s street connections, word has it that Cumbo is interested in running for Brooklyn Borough President, a position current President Eric Adams has until 2021.