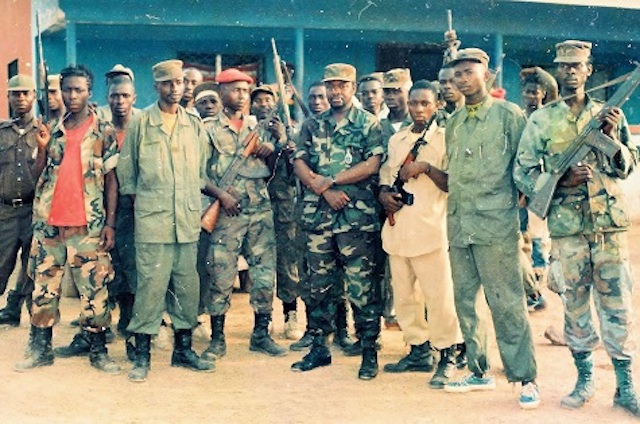 Kunti K. Has Been Arrested! The Trail of a En-slaver, Murderer, and Cannibal

On the 10th of January, French authorities descended upon a Paris suburb to re-arrest a former Liberian member of the disbanded and defunct United Liberation Movement for Democracy in Liberia (ULIMO). To those unfamiliar with this group’s activities, its name may seem innocuous enough, but the crimes alleged to have been committed by the members of ULIMO are among some of the worst war-time atrocities perpetrated in modern history. Yet the man taken into custody in France was no ordinary foot soldier. He was Kunti K., an ex-rebel commander, and he stands accused of a horrendous litany of crimes that include slavery, murder, cannibalism, other war crimes and crimes against humanity. And worse still, Kunti K. is also alleged to have conscripted child soldiers to assist the forces under his command to commit this long list of heinous acts. 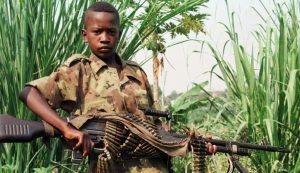 Child Soldiers like this boy were recruited to commit evil acts of war.

Yet a retrace of how Kunti K. wound up re-remanded into pre-trial detention by French authorities was decades in the making. The ex-rebel commander, like others who participated in  two of the most bloody civil wars in the continent’s history that collectively claimed the lives of 200,000 Liberians and internally displaced over a million, fled his native land. But Kunti K. was not alone. Many fled to neighboring countries like Sierra Leone, and others were able to get as far as Europe and the United States. By 1997, the first Liberian Civil War drew to a close, culminating with the election of a now-imprisoned ex-President Charles Taylor, but the fugitive status of Kunti K. had only just begun.

By the end of Liberia’s first deadly civil war, it’s government institutions and political and legal infrastructure was in complete disarray, the state plunged into an utter collapse. The ensuing chaos provided the perfect opportunity for high profile war-lords like Kunti K. to flee their homeland virtually unfettered. Kunti K. journeyed far from his war-torn homeland and gained entry into the Netherlands. Details of how Kunti K. was able to exit Liberia and reestablish himself in a  foreign country or who might have assisted him is still unclear. However there is reason to suspect that his choice of European countries was not the result of mere happenstance.

During that time it became clear that the Netherlands was willing to open its doors to larger numbers of Liberian asylum seekers and refugees. Kunti K. most likely exploited the higher willingness of the Dutch government to accept vastly larger numbers of Liberian Asylum seekers. The civil war caused Liberia’s governmental institutions to head towards full collapse, it would have been nearly impossible for Dutch authorities to properly confirm anyone’s true identity, due to the governments collapse.

Under Dutch immigration law, asylum, refugee, or even stateless status comes with living and economic accommodations, which would have allowed Kunti K. to remain in the Netherlands beyond the five year threshold with a valid residence permit, when he could begin to apply to Dutch citizenship, and allowing him enough time to meet the requirements to obtain a civic integration diploma. Any documents revealing Kunti K.’s true identity were understandably unobtainable. 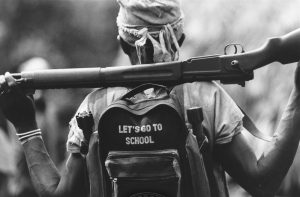 While living in the Netherlands, presumably under a false name, there was little evidence to suggest that Dutch authorities were aware of Kunti K.’s true identity. The second Liberian Civil War began in 1999 and ended in 2003. And while Liberia was still healing from another bloody civil conflict, Kunti K. may have felt he had effectively camouflaged himself into Netherlands society, with his alleged atrocities fading deeper from the memory of Liberian history, but there were living victims and advocates who had not forgotten his evil deed, and some were hot on his trail.

Swiss-based non-profit Civitas Maxima allied with Liberian sister organization, Global Justice and Research Project (GJRP) was led by Hassan Bility. The two organizations were busy gathering evidence as to the whereabouts of Kunti K. and compiling thousands of witness testimonies to his alleged savagery. Their tireless efforts climaxed on July 23, 2018, when Civitas Maxima filed a formal criminal complaint with the Swiss government. The collaborative investigations of the two NGOs, led them to suspect that Kunti K. was on the move and heading towards France, reportedly to rendezvous with a Liberian wife. Swiss judicial authorities notified their French counterparts and urged them to begin looking for Kunti K.

French authorities immediately sprung into action and activated the Central Office to Fight Crimes Against Humanity (OCLCH), which was established in 2013 and led by Col. Eric Emereaux and was formed for just such a task. On September 4, 2018, a joint task force of the French GIGN police and the OCLCH swarmed a villa in the northeast Paris suburb of Bodigny, where Kunti K. was hiding out at the home of a friend. After decades on the run, the former ULIMO commander was arrested without incident and taken to Val-de-Marne prison.

But the saga of Kunti K. would not end without at least one more twist. The investigating judge did not respond to the defense attorney’s application, for a license to communicate with his client. This triggered the immediate release of Kunti K under French law on September 5, 2019. The ex-rebel commander and suspected war criminal was freed, while still awaiting trial, under conditions that he not attempt to leave the country.

Kunti K., who stood accused of upwards of 11,500 individual war crimes and crimes against humanity, was not about to rely on any possible mercy from a European court. He began hatching a plot to leave France. French authorities, who were understandably concerned that Kunti K. would likely plan to abscond, watched him closely. Once French authorities got wind of K.’s plan to flee – not about to let him slip through their grasp – they rearrested Kunti K on January 10th for attempting to violate the conditions of his release.

The seemingly endless list and the appalling nature of the crimes Kunti K. is accused of committing are barely fathomable to the civilized mind. His alleged atrocities appear only to be rivaled in brutality and scope by the likes of Hitler’s Third Reich or the Rwandan and Armenian genocides. While the evidence and witness testimonies the questions still remain as to whether Kunti K and others such as Charles and “Chuckie” Taylor, Thomas Woewiyu, and Moses Thomas will face justice in Liberia.

Currently, Liberia has still not formed a war crimes court in-line with the UN’s International Criminal Court (ICC). Though Liberia, like many other countries, signed on to the Rome Statute of 2003 and ratified it shortly thereafter in 2004, whether or not the statute will be adopted into Liberian domestic criminal law is an issue still pending approval by the nation’s legislature. Only recently has Liberian President George Weah, “broken his silence on the issue.” Additionally, the Rome Statute only covers war crimes committed subsequent to 2003, after the alleged crimes of Kunti K., however the TRC continues to lobby that past atrocities be included within the same legal framework.