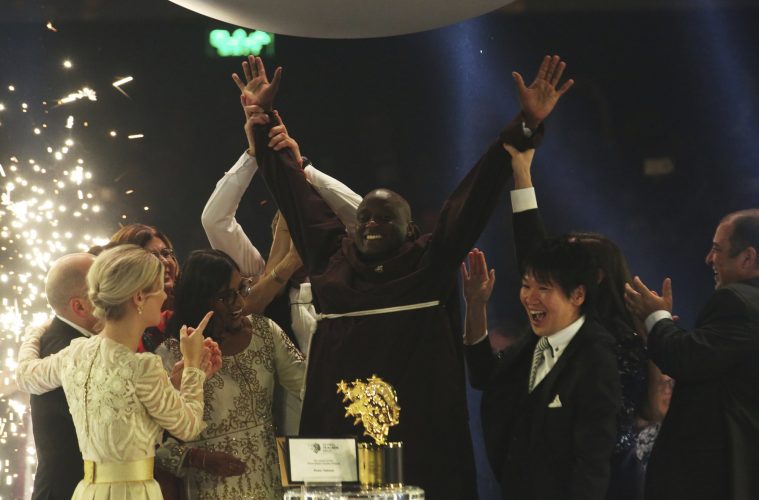 A Kenyan teacher who gave away most of his income to the poor won a $1 million prize on Sunday for his work teaching in a government-run school that has just one computer and shoddy Internet access.

The Associated Press reported that Peter Tabichi, who is from a remote village, won the annual Global Teacher Prize. He’s been more than just a devoted teacher but giving 80% of his earnings to help pay for student fees, developing a local farming program to help local families grow cheaper drought resistant crops which he viewed as a matter of life and death. Tabichi felt that in order to be a good teacher, one has to do more and talk less.

Tabichi was chosen out of 10,000 applicants to win this competition awarded by awarded by the Varkey Foundation. The honor was presented to him by “Wolverrine” actor Hugh Jackman at Atlantis Hotel in Dubai. Tabichi said it was the first time he’d ever been on a plane and that Uganda was the furthest he’d ever traveled.

Tabichi teaches science in the village Pwani . The conditions for the children, most of whom are orphaned, are overwhelming. Drought, famine and not enough resources in the schools are some of the circumstances.

“At times, whenever I reflect on the challenges they face, I shed tears,” he said.

Tabichi thanked his mother died when he was just 11 years old during his acceptance speech. His father, a primary school teacher, was left to raise him and siblings. He credited his father for instilling Christian values in him which drew applause from the audience.

“I found tonight to be incredibly emotional, very moving,” Jackman said. “It was a great honor, a thrill to be here and I just thought the whole evening was just filled with a really pure spirit.”

Kenyan President Uhuru Kenyatta said in a statement that Tabichi’s story “is the story of Africa.”