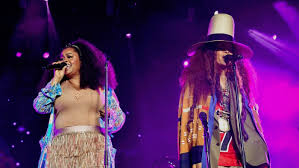 Jill Scott & Erykah Badu: A Battle Between Queens Voted Soothing for the Soul

Whew, all the vibes and feels for sure baby! Afrocentric energies and soul-filled vibrations traveled the waves of social media on Saturday night when neo-soul aunties Erykah Badu and Jill Scott took the stage in a battle rated M for much needed.

The clash served as the latest installment of the “Verzuz” Battle Series where heavy-hitting music artists and producers duke it out hit-for-hit on Instagram Live to see who has the superior music catalog. Badu’s and Scott’s battle surely did not disappoint as viewers received a front-row seat to the 3-hour jam session filled with words of love and soulful melodies exchanged between each singer.

Both ladies decided to kickoff the duel with “You Got Me” by The Roots featuring Badu and written by Scott. Badu played the mainstream record while Scott opted to play a live recording of her performing it with The Roots in 1999. Of course, the momentum was kept with each queen dropping their most popular and beloved melodies. Badu made sure not miss as she delivered with hits such as “Bag Lady”, “Window Seat”, “On & On”, “Love of My Life”, and others. Scott treated our spirits too with dropping “Getting in the Way”, Can’t Wait”, “The Way”, “So in Love”, and more.  As the night continued, the feelings of nostalgia, love, and positivity only enhanced as timeless neo-soul melodies filled the speakers of those tuned into this not to miss moment.

Say word. Wow ya’ll. Seriously… WOW!!!!!!!!! Which means-views, sitting on the live, signing up for the notifications, interacting and commenting, conversations all day and night, and posting) it was GLOBAL. Congratulations ya’ll!!! The CULTURE WINS!!!

The ladies made it their business to continually send adulation to each other with compliments, memories, and just their presence. “You look beautiful” Scott told Badu during the night to which Badu replied, “Thank you I feel beautiful”. Just to reiterate an earlier point: whew all the feels baby!

Badu and Scott coming together to deliver music, and uplifting spirits to fans worldwide was a much needed “for the culture” moment in the black community. The live racked up almost a whopping 700,000 viewers making it the most-watched Verzuz battle. Even former beloved FLOTUS Michelle Obama dropped in on the show leaving some comments in the chatbox. If you were not able to catch the battle when it aired live, you can check out some clips and even the entire stream on YouTube and other social media websites. Sage, incense, and shea butter recommended but not required.