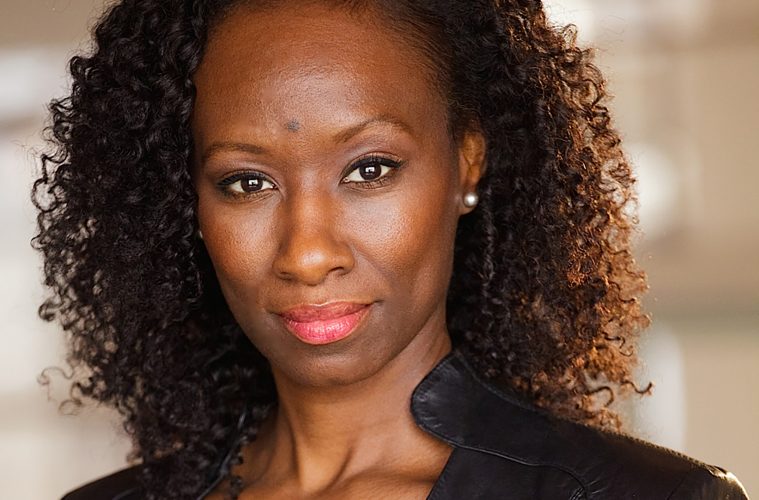 Tanya Alexander is a woman of many talents.

She is a spoken word and voiceover artist, along with a film, television and stage actress who won an NAACP Theatre Award for best solo show.  Hollywood Black Film Fest also honored her with their best music video accolade.

Born and raised in St. Louis, Missouri, Tanya is a graduate of Saint Louis University and the American Musical and Dramatic Academy in New York, where she appeared Off-Broadway. Tanya first came to this reviewer’s attention last October, when she starred in the sex farce “Mono/Poly” at Los Angeles’ Odyssey Theatre.

Only a few months later, she was playing another female lead in “Human Interest Story” at the Fountain Theatre, which just won the Ovation Award for Best Season, the L.A. theater scene’s highest honor.

Tanya Alexander: [Laughs.] It’s really interesting how we can, in essence, take these things that are pretty universal and 80 years later do a play with some of the same character dynamics, and it’s still relevant. It’s a great honor to play the part of “Jane Doe,” and her message. It’s super powerful. It’s so telling how we are as a society that I can play this character [today] and it’s just as relevant as when Gary Cooper did it.

NO: How is “Human Interest Story” relevant and what’s its message for 21st century audiences?

TA:  Some aspects of our society, especially when it comes to capitalism, disparities in wealth, definitely racial differences, we need to continue to make as many changes as we can. It’s been centuries of discrimination, disenfranchisement and complete inequality we still see today. Homelessness, women and children in particular, is nearing numbers of the Great Depression – that cycle has come back around. Some of the things we’re doing haven’t worked and we need to make more significant changes in the way we run our society. It needs to progress to a point of really seeing humanity and people being more concerned with the state of human beings, as opposed to capitalism, corporate structure and dominance and making money. It doesn’t matter if humans are being treated like trash on the street. It’s been centuries of cycles of social injustice. We still have lots of work to do to solve it.

NO: Tell us about your character Betty Frazier, aka “Jane Doe”?

TA: She’s extremely smart, resourceful, observant and faithful. Very educated – has a master’s degree. Her father was also a teacher, who motivated her to teach elementary school. She ends up in dire straits due to the school district’s budget cuts and Betty is laid off. Living paycheck-to-paycheck like most Americans, she loses her apartment, stays with a friend as long as Betty can and ends up living on the street for three years, when she meets newspaper columnist Andy Kramer [Rob Nagle plays the journalist role Barbara Stanwyck had in Capra’s movie], and they decide to pass her off as “Jane Doe”… They both feel disenfranchised, tossed away, and a truth needs to be spoken about the system… It’s fun to play Betty.

NO: Which of your other works dealt with social justice themes?

TA: I’ve done a number of projects that dealt with gentrification, racial divide, class divide… I played a social worker… dealing with the foster care system in a [2016 short] film called Jada, which dealt with protocol versus saving kids. Seeing how kids end up on the streets and being abused. I played a lawyer in a [2016 short] film called Beyond Doubt who had to prosecute a police officer who killed another police officer who killed a young Black kid on the street. I did the show Honky at San Diego Rep[ertory Theatre] about affluent, professional Blacks seeming like they might not be part of the Black community or feeling too white.

NO: How do you approach performing in productions with social justice issues?

TA: When a social issue comes up I just go all in, in terms of researching it – through the Internet, articles or preferably talking to people personally who have experienced it. For “Human Interest Story” I watched the YouTube series “Invisible People,” I spoke to a number of homeless people living on the street or in a park and friends who lived in their cars for months or years who can’t afford L.A. rent.

NO: Sounds like you’d also be a great investigative reporter.

TA:  [Laughs.] Research is important. As an actor I make sure I know more than just what’s in the script, that I have powerful underlying motivations. 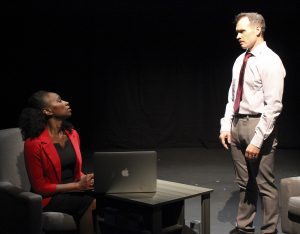 NO: Tell us about “Mono/Poly” and your character?

TA: “Mono/Poly” was a play about relationships, a polyamorous triad; I was the wife. We meet two monogamous couples and influence them in terms of their relationship, honesty, transparency and what a person needs. My character, Victoria, is very powerful, strong, honest and unapologetic about her journey and choices and very much a mentor and teacher [laughs] for the white monogamous couple in particular, regarding what they want. Playing that character and doing that play was a pleasure.

NO: I won’t invade your privacy by asking what kind of research you did to play Victoria, but I want to ask you about her wacky slippers.

TA: [Laughs.] Victoria’s dragon claw slippers were the idea of the costumer. I got to keep them.

NO: Was this a way of expressing through wardrobe that Victoria was a “dragon lady”?

TA: Yeah. It marked her character. I loved it.

NO: This year the Academy Awards were criticized again for the #OscarsSoWhite controversy. What do you want to say about diversity and inclusiveness for Black actresses in L.A.?

TA: The biggest thing is creating our own content. I’m familiar with the Academy – there’s a preponderance of one demographic: white males. The sensibility of the people doing the nominating is coming from a specific demographic. If the Academy itself was more diverse you’d see more diversity in the nominees and winners.

NO: L.A. is mainly known for movies, TV and the recording industry. But how would you describe L.A.’s theater scene?

TA: It’s huge, bigger than most people think. It’s the biggest in the country. There’s always work if you’re willing to do black box theaters and smaller spaces.

NO: What’s next for you?

TA: I just finished a short film about a homeless man called “Teardrop.” Plus “1001 Cuts,” a Virtual Reality project I did for motion capture.

Ed Rampell is an L.A.-based reviewer and co-author of “The Hawaii Movie and Television Book”