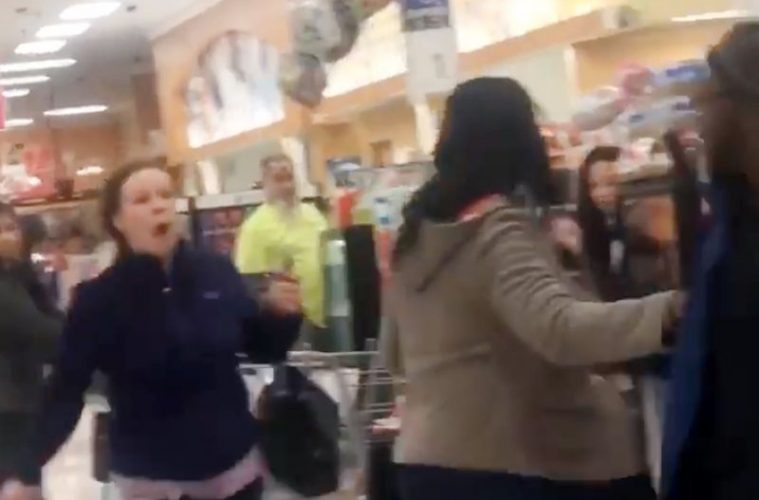 Corinne Terrone resigned from Hamden Public School after a video in which she used the N-word three times and spit at a Black man and woman went viral on March 15.

The racist incident took place at a Connecticut Rite Aid and filmed at store in East Haven according to the Facebook post where the encounter was uploaded. It has been viewed more than 400,000 times and shared over 10,000 times. In the clip, she also threatened to call the cops on him.

Lt. Joseph Murgo released a statement and said East Haven Police “is aware of this disturbing video and the hate speech contained in it” but that no complaint has been filed. Murgo added that spitting would be considered assault and that they were working with the Rite Aid for any possible investigation.

“We have a lot of avenues to go down if somebody were to reach out to us,” Murgo told the New Haven Register. “We want somebody to come forward… if they were present last night.”

Terrone’s children were also in her company as she went on this racist diatribe. As a result, a Department of Children and Families report was filed. The school district also weighed in on Terrone’s behavior as she was employed by the Hamden Public Schools.

“Someone who will use that sort of language in any setting, whether public or private, is not someone we want anywhere near our children. The employee is separated from service, and we hope that her children will receive the support they need after witnessing such a traumatic event,” the statement read.

“What I saw was vile and shocking. While I am disgusted and disheartened seeing such hateful behavior, wildly unacceptable anywhere, I am thankful for the swift and effective actions taken by our school system to address this head on and make clear that hate and violence will not be tolerated,” Leng said.

“Hamden values the inherent worth and dignity of all people, and the actions and statements in the video do not reflect those values,” McGarry said.

Those with information can contact the East Haven Department of Police Services at (203) 468-3820.