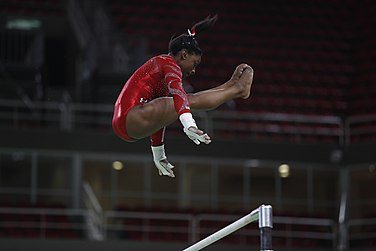 Historically, Black people throughout the world have long struggled to have adequate information and access to mental healthcare resources. This has led to the perpetuation of stigmas about Black people being extraordinarily strong while putting aside their mental and emotional needs. Black athletes, specifically, have been praised for breaking world records and showcasing a great amount of physical strength, but their psychological wellbeing has rarely been a topic of conversation. Today, however, American gymnast and Olympic medalist Simone Biles, who has made history by winning the most World championship medals, has shown us what it looks like when a Black woman prioritizes her mental health, despite the expectations of the world. On Tuesday July 27, Biles chose to withdraw from the summer 2021 Olympic team competition in Tokyo to focus on her mental health.

After years of consecutively winning championships, 24-year-old Simone Biles became the face of women’s artistic gymnastics, not only for her USA team, but also globally. She appeared in a multitude of campaigns, ranging from cosmetic brands to social justice organizations. Like many talented Black athletes, her exceptional skill landed her contracts and sponsorships, along with the pressure to perform for the millions of fans watching.

The United States’ gymnastics’ team has, until the last few years, been known to be composed of mostly white athletes. With Simone Biles, Gabby Douglas, and Lauren Hernandez competing in the 2016 Rio Olympics, the team had finally reached its most racially diverse group of participants, showing Black and Brown girls throughout the world that they, too, were deserving of recognition for their talents.

ith victories, for herself and for the Black women she has inspired, they have also required her to maintain an immense amount of mental and physical resilience.

“I truly do feel like I have the weight of the world on my shoulders at times,” Biles shared on an Instagram post prior to the final Olympic competition. “I know I brush it off and make it seem like pressure doesn’t affect me but damn sometimes it’s hard[…]”

Biles has faced and overcome numerous obstacles throughout her career. Her experience as a survivor of Larry Nassar’s abuse was perhaps one of her most devastating trials. In January 2018, Biles shared her personal story on Twitter, stating that she had been abused by the now-imprisoned former USA Gymnastics doctor, who had worked with the women’s team for 18 years. Prior to this, many other survivors, including gymnasts Gabby Dougals, McKayla Maroney and Aly Raisman, had come forward with their stories. Biles was the only survivor who

chose to compete in the Tokyo Olympics following the confirmed sexual assault allegations and imprisonment of Nassar.

The U.S.A Gymnastics (USAG) had failed to report numerous cases of abuse in the past. Biles chose to return to the Olympics to “be a voice” for survivors, and to pressure the USAG to “do something”. “I feel like if there weren’t a remaining survivor in the sport, they would’ve just brushed it to the side,” Biles stated in an interview with host Hoda Kotb for the TODAY Show. When Biles walked away from her team competition, she catapulted a movement for survivors and athletes, by showing that prioritizing mental health is a sign of strength. Despite the callous words of critics who attempted to paint her as a “weak” “national embarrassment”, Biles stood in her power, as courageous and confident as ever. Supportive fans, teammates, celebrities and public figures, including Michelle Obama, Kerry Washington and Janet Jackson, have voiced their support for Biles and her decision to put herself first.

“The Olympics was not how I expected it to go, but putting my mental and my physical health first will probably be one of my greatest accomplishments,” Biles shared during a Zoom meeting with President Joe Biden and First Lady Jill Biden.

Simone Biles’ exit from the Olympics serves as an example that bravery can come in the form of letting go, of choosing oneself. The expectation of sacrifice for the sake of the greater good, or for the sake of performance, has plagued the Black community for far too long. Biles’ courageous choice is paving a path for future generations of Black athletes to find freedom through self-preservation and selfcare.