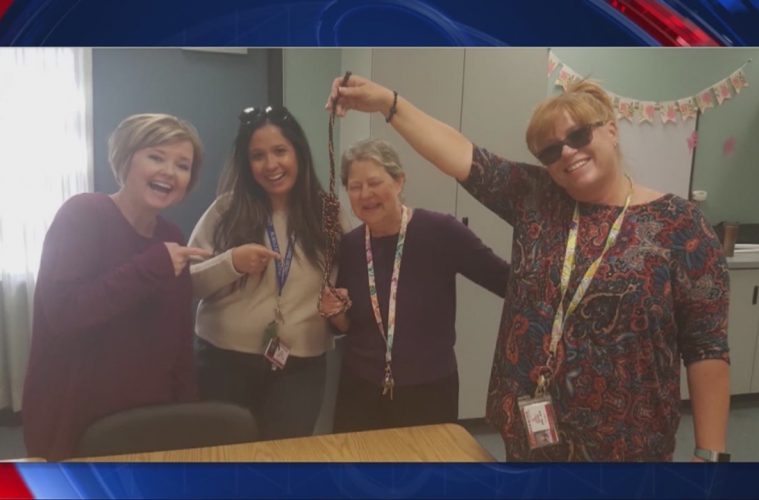 Principal, Teachers Suspended after Posing With Noose in Leaked Photo

A principal and four teachers were suspended after they appeared in a photo in which one of the educators held up a noose and they all smiled.

According to Los Angeles television station Fox 11, Linda Brandt, the principal of Summerwind Elementary School in Palmdale, California, allegedly emailed the photo to her staff. She further attached a second image of the noose hanging in an office.  The four first-grade teachers are seen laughing while pointing at the noose which has been used to hang people, including black slaves many years ago. There was nothing written in the body of the email.

The Palmdale School District confirmed that all four were now suspended as a result of their actions.

“Yesterday, it was brought to the Palmdale School District’s attention that an incident involving the discovery of a noose and possibly inappropriate responses to that discovery occurred at Summerwind Elementary School. The Principal and the personnel involved in this matter have been placed on administrative leave pending an investigation of the matter. We will follow process and procedures to conduct the investigation,” Superintendent Raul Maldonado told Yahoo Lifestyle Thursday.

Brandt had been in consideration to become the next district superintendent. However, outraged parents wanted Brandt and the others fired once the picture leaked onto Instagram.

“We want her gone from this school. And that’s just it. We want her out of her. I do, personally,” Darrin Harper, a parent, told Fox 11.

Many said that the school had a race and racism issue. Breyon Clemmons shared that she had problems with teachers singling out minority students.

“I’ve requested that my kid be taken out of one classroom because that teacher, in particular, has shown prejudice discrimination against my kid and when I requested the black teacher I got grief for that,” Clemmons said.

One of the teachers, Michele Lemair, said that African Americans only made up one third of the students and Hispanics another third. There were also few teachers of color.

“The lack of people of color teaching is a huge issue. Especially being highly qualified Teacher the need is great hit apparently It’s not being addressed but there seems to be a sorting of who should be working here,” she said.

Shaka Phillipps, a former teacher, administrator, and educational consultant, told Yahoo Lifestyle that she pulled her 6-year-old niece from Summerwind on Thursday morning. She was upset that all four resumed their daily lessons despite their alleged suspensions.

“They had the audacity to show up today,” she says. “The integrity of the school is completely compromised. To the black community, a noose is a weapon, a symbol of slavery and lynching.”