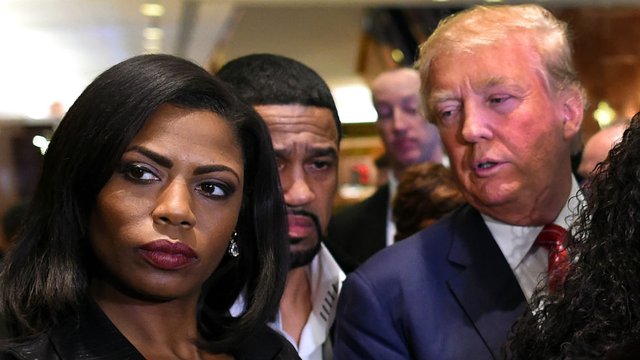 Calling Omarosa a dog is more than just an insult.

When you give a crazed, crying lowlife a break, and give her a job at the White House, I guess it just didn’t work out. Good work by General Kelly for quickly firing that dog!

Using this reference to describe the only African American to have served in a senior role in the White House is a disgusting statement that traffics in sexual and racial imagery. In the media, Trump continuously denies being racist and always resorts to name calling anytime he is faced with opposing views i.e shaming “Sloppy Steve”, calling Michael Wolff a loser and his most infamous insult…”Crooked Hillary.” Constantly using this bully tactic is Trump’s go to but he stoops a bit lower when using this to attack people of color.

It’s no mystery that Trump has a rocky relationship with people of color. For the past few years racial tensions in the U.S have been high, from alt-right rallies, the Charlottesville anniversary, and many other racial based protests, Trump still refuses to come out about racism and white supremacy. Even in July, a national poll by Quinnipiac was taken and it was found that 49%of America believes that Trump is racist, while 47% believes he is not.

Regardless of Trump’s denials of racism and bigotry, calling a former staff member of his own white house a dog speaks for itself. To call a woman of color a dog is the most blatantly sexist and racist name calling he Trump could choose to do to escape using the n-word.  Many who have studied social behaviours have identified that there is a huge connection between using animal name calling and the stripping away of basic human rights. From Jews being called rats in Nazi films, Hutus calling Tutsi “cockroaches” during the Rwandan genocide and pro-slavery propaganda comparing African Americans to monkeys, it is fact that calling minorities animal terms are very dehumanizing and racist.

We all know this isn’t Trump’s first time doing this. On the same day of calling Omarosa a “dog”, he tweeted about the suspect in a London terrorist attack being an “animal.” It seems as though when our president shares his opinion on people who battle his beliefs and are of another race, these animalistic terms come out.  Think back to his tweet explaining how immigrants would “infest” the country, speaking of them like vermin and not human beings.

Though Trump has a long list of insults for everyone, nothing sets him off like being clapped back by people of color. Let’s not forget the Maxine Waters feud for example. When it comes to black people and black women, Trump has only one route. Whether it’s a black athlete, black journalist, or a black member of Congress, it is their intelligence and their humanity that Trump chooses to attack.

So why are so many still wearing blinders when it comes to Trump’s racism? This is the same man who expressed that “very fine people” were supporting neo-Nazis and was sued in the 1970s for not wanting to rent to black tenants. Why does America still remain in denial? America needs to stop wondering if what is being thrown in our face is truly sexist or racist. It is. It’s time to end the debate once and for all.