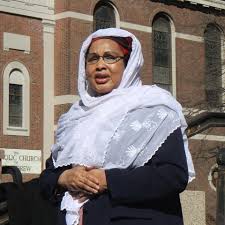 Eight years after the killing of Mohamed Bah by NYPD officers his mother continues her tireless fight for Justice. On Sept. 25, 2012, Mohamed Bah, a Muslim immigrant from Guinea, was killed by the NYPD after his mother, Hawa Bah, called 911 for an ambulance for her son who was in emotional distress and needed medical attention.  What followed next is symptomatic of a broken system where the use of brute force is the answer to all things. Despite Mrs. Bah pleading with them not to, Emergency Services Unit officers forced their way into Mr. Bah’s apartment – against NYPD protocol and without a warrant – with guns drawn and shot him eight times, killing him. Evidence shows that the last shot was fired at close range by NYPD ESU Officer Edwin Mateo, while Mr. Bah lay on the ground.  None of the officers involved in Mohamed’s death were held criminally accountable or disciplined by the NYPD for killing Mohamed or making false statements and committing other misconduct surrounding the incident.

Like the countless Black families whose loved ones have been killed at the hands of America’s trigger happy police. The long road to justice continues. Mrs Bah an unsung heroine of the movement for police accountability in America, continues to find the fortitude to fight against a police force so powerful that it murders with impunity and with the tacit approval of all those that are supposed to hold them accountable.

The lack of courage shown by the judicial system as a whole is only matched by the complete disregard for human life shown by too many NYPD officers. “I was scared for my life” is clearly the most practised phrase in police locker rooms.  The community must continue to support the Bah family in their fight for justice.

If you are in  Harlem today lift up Mrs Bah by attending the memorial vigil rally and press conference where Mrs. Bah along with grassroots organisations, artists, faith leaders, and elected officials will gather to shine a light on Mrs. Bah’s demands to #defundNYPD and for the termination of NYPD officers who killed her son.

Mrs. Bah’s demand for justice comes in the midst of days of protest and outrage after the release of body camera footage that shows Rochester police killing Daniel Prude, who was experiencing emotional distress, by placing a hood over his head and holding his face to the ground.Mrs. Bah and her supporters will also call for the City Council and Mayor to defund the NYPD and redirect resources to mental health and other services and for the Mayor and NYPD Commissioner to fire Mateo and the other NYPD officers who killed Mohamed Bah.

Join us today, 12pm! Stand w/ the mom of #MohamedBah to demand 1. Removal of cops as first responders to mental health…

Memorial Vigil, Rally, and Press Conference
Friday, September 25, 12-1:30 pm In front of 113 Morningside Ave, Harlem(Mohamed Bah’s apartment and where he was killed)

Atendees at the vigil and rally include: