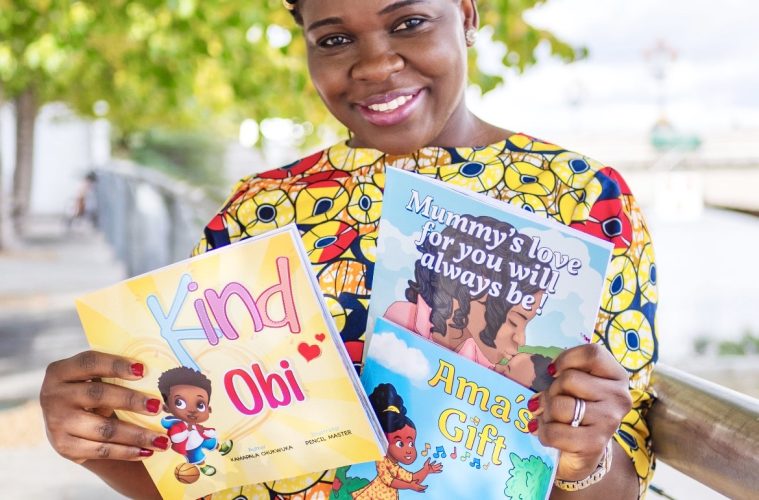 Visiting her local libraries, became a disheartening experience as she would return home with the ‘’same books’’. Clarifying her point, Mrs Chukwuka stated: ‘’mainstream, European plot centred storylines and even when we wanted variety. Variety was in the form of animals, or monsters, or aliens there were no books available to us that had characters that looked like them [her children].”

Initially, Mrs Kamapala assumed she was perhaps not being intentional enough when looking for children’s books. When she did discover diverse books, they were either unsuitable for the age of her children or were engrossed in stereotypes. At this stage, Chukwuka extended her search to other libraries in her locality and concluded that ”it was the same story, different library’’ and began to purchase books on the internet.

”We had to turn to Amazon to shelf our own personal library. If you’re a parent, you know this can be quite expensive when you are trying to buy books off Amazon all the time. That’s why I think what I am doing right now is very important. I am trying to make these books available to our libraries and our schools.”

‘’If there is a problem in the slightest way, I can provide a solution’’

When Chukwuka was unable to find the variety of books she was yearning for, in her mind she thought someone else would write the books she was desperately longing for into existence. Well aware of the demand from the greater diversity of children’s books Chukwuka humbly chuckled ”Anybody, but me. What did I know about children’s books.”

There was nowhere to escape from the dire representation of children’s books and an unconscious voice was telling Chukwuka that she would have to be one of the authors contributing to diversifying the industry. ‘’If there is a problem in the slightest way, I can provide a solution’’ says the author of 3 children’s books.

A story that haphazardly developed while visiting a friend would later materialise into Chukwuka’s first book Mummy’s love for you will always be which cherishes the unconditional love a mother has for her child. The picture book which is celebratory of a child’s first achievements and early landmarks made is colourfully illustrated to a high standard and since its publication in 2018 continues to receive scintillating reviews from very satisfied parents. When Mrs Chukwuka published her first book Mummy’s love for you will always be, she was preoccupied with ensuring her children see pictures that reflect themselves, but as the author’s journey continues to progress, she views her books as a pivotal resource for the ongoing discourse about diversity and inclusion. The motivational speaker and life coach said: ‘’We can’t live in a bubble anymore. None of us is going to live in a bubble forever because the way the world is right now, people are crisscrossing. People are travelling all over the world for work, for entertainment, for one thing, or another. Even just having access to social media means that you’re open to the world. Being open to the world is a beautiful thing.”

Chukwuka experience in publishing her books is not dissimilar to many aspiring Black authors. Commonly cited reasons for a lack of diversity from literacy agents are centred around insufficient submissions from Black or global majority people or a lack of quality which is said to be disingenuous and more a reflection of the publisher’s anxiety and assumptions about reaching non-white middle-class audiences and the lack of interest of the host society. Chukwuka’s own account echoes some of the issues highlighted in a 2020 report Rethinking Diversity in Publishing.

Reflecting on her experience of trying to get her first book published, Chukwuka revealed a particular publisher who declared ”We love it. We absolutely love your manuscript. However, when you wrote your manuscript you explained the fact you wanted to use diverse characters. After doing this for many many years, there is not enough demand for your characters. Our expert opinion is go mainstream. By mainstream, they mean European. Use European characters and that way you will have best sellers and make so much money with this book.” For Chukwuka ‘’it was never about being number one. It was about making a difference’’. Her books have been well-received, but she refuses to anglicise characters to achieve greater success. As a result, Chunkwunka chose to self-publish Mummy’s love for you will always be and her sophomore Ama’s Gift which is about a young girl who has a marvellous voice, but only sings to her parents as she is worried about what others think. The book is an excellent resource for installing self-confidence and eliminating self-doubt in children aged 4-10.

Chukwuka’s new book Kind Obi tells a story of a kind boy who spreads kindness everywhere he adventures and serves as an exemplar of how children can be courteous and inclusive of other cultures.

Kamapala Chukwuka holds presentations, talks, and interactive sessions in schools and various venues. She is available for booking via: https://www.kamapalac.com/author-visit

As part of Black History Month in the UK, Kamapala will be speaking at the following events: 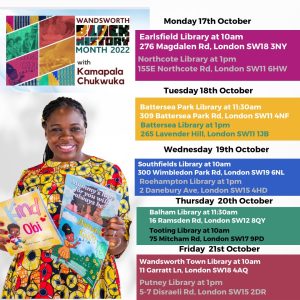 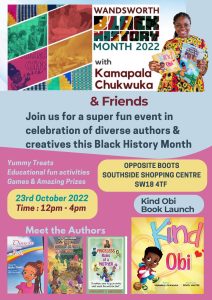