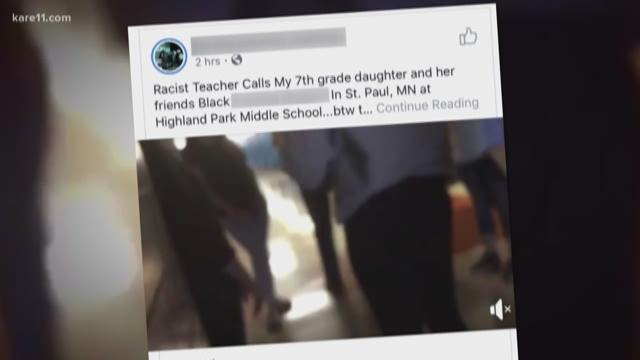 A teacher in St. Paul, Minnesota has been placed on administrative leave after referring to her Black students as “f*cking ni**ers.”

The video began with Brilowski, students and another adult standing in a school hallway. Allegedly, the teacher and another student had a problem in the classroom, which led to the racist abuse.

“I just walk around the room … I just pick on them. ’Cause they’re black. And they’re the only [expletive] [racial slur] doing any work,”Brilowski said.

Superintendent of St. Paul Public Schools Joe Gothard responded to the incident May 9. He released a statement confirming the teacher’s use of the slur and announced her suspension. A video also accompanied the prepared remarks.

“No matter the situation, the racist and foul language used by a staff member in the video has no place in Saint Paul Public Schools.” Gothard said. “The words and actions recorded in this video have caused harm to our Black students, their families and our entire school community. These actions go against Saint Paul Public Schools core values and its commitment to serving youth and families.”

Students at the school stated that this was not the first time Brilowski has hurled racial abuse at them. Donte Suttle told 5 EYEWITNESS NEWS  that his daughter was in the viral video and that she no longer felt comfortable returning to the school.

“I don’t even like listening to that video, it’s just something I don’t like hearing,” Suttle said. “It’s scary, you know, we look for these schools to be a safe environment for our children.”

Suttle added that he was not satisfied with how the district chose to address the racist tirade.

“Nobody is saying what they’re going to do,” he said. “What’s going to happen, are the policies going to change? Can we put policies in place to make sure we have something that’s protecting us? Can we get more minorities into that school?”