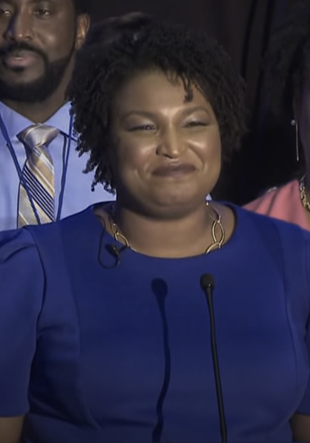 History has been made. What was once a red state has turned blue due to the efforts of Stacey Abrams. We thought her losing the Governor’s election in 2018 was the end of her hard work, but it turns out she succeeded in ending voter suppression for many Georgia Peach’s. “But this work did not happen overnight. It didn’t happen over two years,” said Stacey.  Political leader Abrams’ 10-year growth strategy for Georgia and her national voting rights organization, Fair Fight led to the success in flipping the senate blue, resulting in Biden|Harris winning the presidential race.

Back in early November of 2020, 105 of Georgia’s 159 counties certified their election results and pushed Biden in a 14,000 vote lead against Trump. A remarkable turnaround since a Democrat hasn’t won Georgia’s electoral votes since Bill Clinton in 1992 — that’s 30 years!

This fight against voter suppression Abrams has been working against since she was 17 years old. Abrams believes, “Politicians believe their way to preserve their power is to impede the ability of voters to be heard. And typically they target people of color, young people, and they target the poor.” Her fight in helping 800,000 Georgians become voters resulted in 5 million votes in the recent election, that’s 1 million more than previous years. We should also point out that most of the new registrations came from residents in communities of color, but that should be no surprise to you.

During the year of Stacey Abrams’ Governor election, the once Republican-run state slashed nearly 670,000 voters from its rolls. And you guessed it, 70% of those suppressed voters were Black! Unfortunately, her leadership efforts didn’t present themselves until the next election. Abrams claims she will be running for Governor again in 2022. If she runs and wins she will be the first Black woman governor in American history; similar to Kamala Harris became the first Black woman Vice President in the USA. I don’t know about you, but it amazes me that we are still fighting Jim Crow laws in the 21st century.