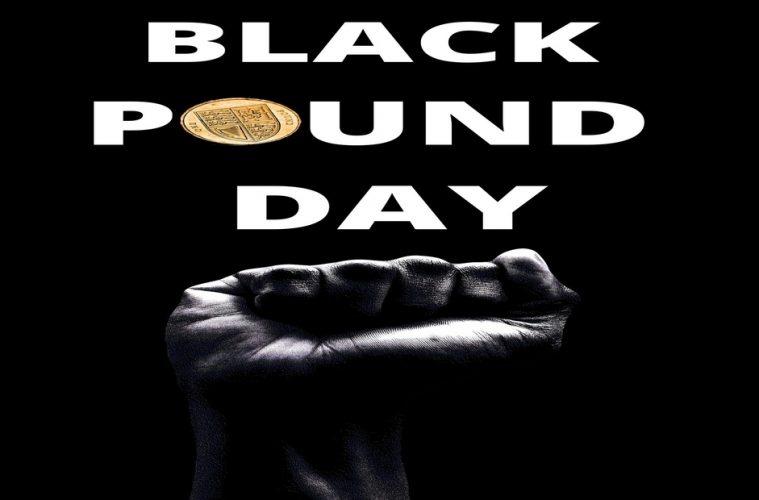 Black Economics Matters: From Black Pound Day to Black Pounds All Year Round

Saturday 27th June 2020 marked the first-ever Black Pound Day. The Black populations within the UK have practised economic boycotts from non-black businesses on a more global scale before.  The social media-inspired Blackout Day, took place 6th March 2015. Black Out Friday is a reverse response to the US-inspired Black Friday which encourages mass consumption.

Black Out Friday was launched in November 2014, after Michael Brown, an unarmed black teenager was assassinated on August 9th 2014 in Ferguson, Missouri by a white police officer Darren Wilson which resulted in heightening anguish and mass protests and uprisings across Ferguson. Just a month before on July 17th, Eric Garner was killed after struggling to breathe as a consequence of being put in a chokehold by New York City Police Department (NYCP) officer Daniel Pantaleo. The phrase ‘’I can’t breathe’’ expeditiously rose from this animistic annihilation.  It was only the preceding year that the UK began following the U.S tradition of Black Friday, making the Black Out Friday in the U.S more palatable for people residing in the UK to demonstrate their solidarity of the Black Out Friday initiative in the U.S.

Black Pound Day, however, is the first initiative I can recall getting considerable exposure. The exposure has transcended the usual coverage of other 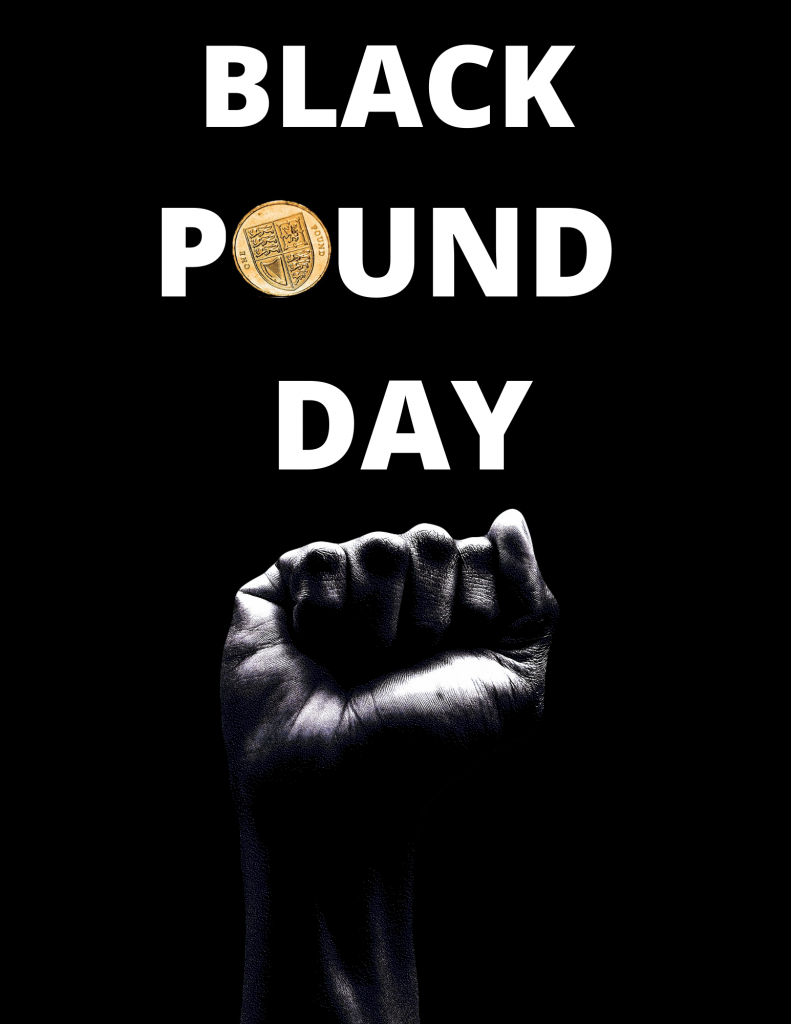 initiatives such as The UK’s Annual Reparations March which has been going since 2014 with little coverage except for the likes of Brixton Buzz, Russia Today (RT), The Voice Newspaper and in recent years, The Evening Standard.

Black Pound Day gained momentum on dominant media outlets such as BBC News, Sky News, The Guardian, The Independent, Time Out and the UK’s widest printed circulated newspaper, The Metro.

Much of this illumination is likely to do with the highly visible and widespread video of George Floyd who was subjected to an abhorrent and callous onslaught by Officer  Derek Chauvin, casually placing his knee on his neck for an astonishing 8 minutes and 46 seconds after he was arrested for allegedly using counterfeit currency. Chauvin’s’ interaction with Floyd subsequently led to his murder on  May 25th.

Since this time, corporations, educational institutions and politicians have vocalised their commitment to terminating structural racism and police departments such as the city of Minneapolis have promised to dissolve their departments.

In the UK, after much deliberation from politicians and a leaked Public Health England (PHE) report that categorically attributed the disproportionate number of COVID-19 UK deaths amongst Black and what is referred to as ‘’BAME’’( by popular hegemonic discourse) to racism. For many Black people, this was hardly a revelation. Black people did not have undisputed evidence to make such claims, without those that wish to silence such statements accusing Black people of  ‘playing the race card.’  I have experienced in one of the places I work attempts to explain the COVID-19 disparity in disturbing narratives that are akin to scientific racism. 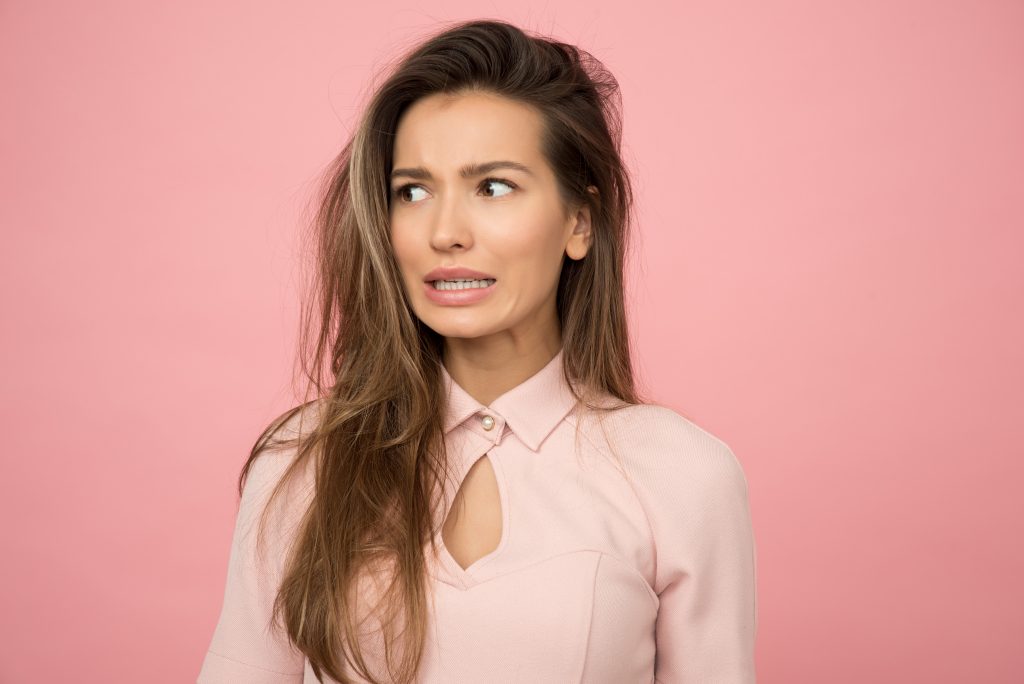 As I expected, I have heard all kind of preposterous statements to deflect from the elephant in the room. To avoid whiteness being interrogated under the microscope, utterances of white fragility take precedence.  As it is not just one individual, in many cases I have been selective in responding, as I recall several years ago reading Reni Eddo-Lodge’s compelling book ‘Why I No Longer Talk to White People About Race’. I concluded that many of the people at one of the places which I presently work are fully aware of Britain’s racism but want a reaction and I have no time to explain things to people who have no sincere intention of logical dialogue. The lack of sincerity is evident in comments such as ‘’99.9% of the time when a police officer stops a Black person and holds onto their hands, it is because they are going to run away’’. 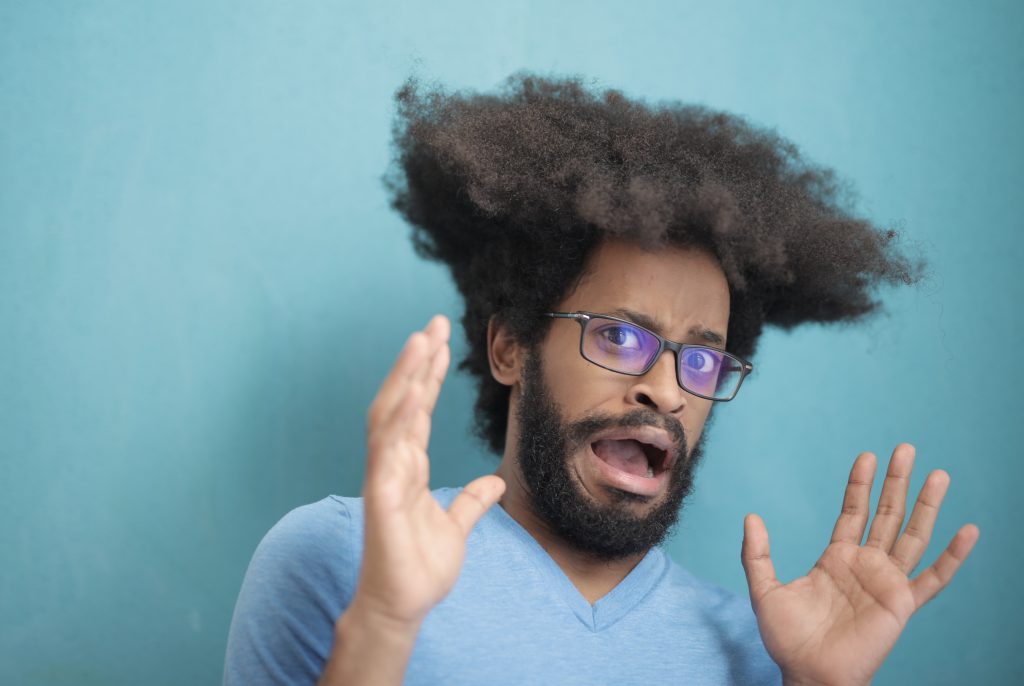 I mean, how can someone seriously make such statements? And then laughably casually state that I used to work on London Transport Revenue as your empirical evidence. Even if you give countless examples that are anecdotal, or you make reference to material from research papers, they will still bathe themselves in white fragility. I often find myself just shaking my head and smiling at the absurdity of it all.

And let us not forget the ‘Oh he/she was a criminal argument’’ when a black person is scornfully killed by the police. The mentality is reminiscent of when black people were being routinely lynched, and the common rhetoric of that era was ‘‘He/she looked at a white person in the wrong way’’. Such justifications are why black enterprises like Black Wall Street in Tulsa, Oklahoma and lesser-known Black Wall Street’s such as Durham in North Carolina were burned to the ground in the early 1900s.

If Britain is institutionally racist, then health, social and economic factors are not exempt from these inequalities. Therefore with the advent of the COVID-19, the pre-existing structurally racist injustices would only be exacerbated under this pandemic. Such gross inequalities don’t just appear from nowhere.

With Britain still reluctant to admit the racism that is at the very fabric of its society and the current Commissioner of The Metropolitan Police Service (MPS), Cressida Dick, denying that The Metropolitan Police force is institutionally racist and according to the Huffington Post Cressida stated… “Our values are about treating people fairly and having a really inclusive workforce’’.

This incident came shortly after Jordan Walker (now 24 years old) spoke to ITV News after he was fatally left paralyzed from his chest downwards after being tasered by police as he jumped over a fence on the 3rd May 2020.

To inflame the situation further, the Independent Newspaper reported a horrendous incident where a black 13-year-old teenager and his father were ‘’randomly stopped at taser point..’’ in relation to a stabbing in the area (Tottenham), which had nothing to do with them.  Both son and father were placed in handcuffs and wrongfully arrested after the incident Hugo Boateng (son) was left with bruised legs and scratches on his face. Father Andrew Boateng described the ordeal as ‘’humiliating institutional racism’’.

“They see us as guilty until proven innocent’’

Last week, high profile British sprinter Bianca Williams and her partner Ricardo dos Santos was stopped by police providing Santos to declare during a Sky News interview “They see us as guilty until proven innocent’’. The last fortnight alone demonstrates that the Metropolitan Police are institutionally racist. To suggest otherwise is to suffer from cognitive dissonance.

Some could argue that Black Pound Day could not occur at a much more appropriate time where it is evident that many smaller organisations don’t mind taking money from black hands, yet treat black people with discontent and are under hyper-surveillance when they enter premises to spend money (or will be as the restrictions are further lifted this week).

Whilst I fully endorse Black Pound Day and refrained from spending non-black on this day (in fact I haven’t spent from a non-black business between 24th June and I still have yet to as I write this piece); such initiatives are not effective on a longitudinal scale. How effective are such initiatives though?  Even on a short term scale? Many people have likely consumed with non-black people the day prior to Saturday 27th and have likely reverted to spending non-black by Sunday 28th until the next Black Pound inspired day which occurred on Tuesday 7th July (Black Out Day). Ultimately, these conglomerates still get the money from Black people’s laborious work, just at different intervals. 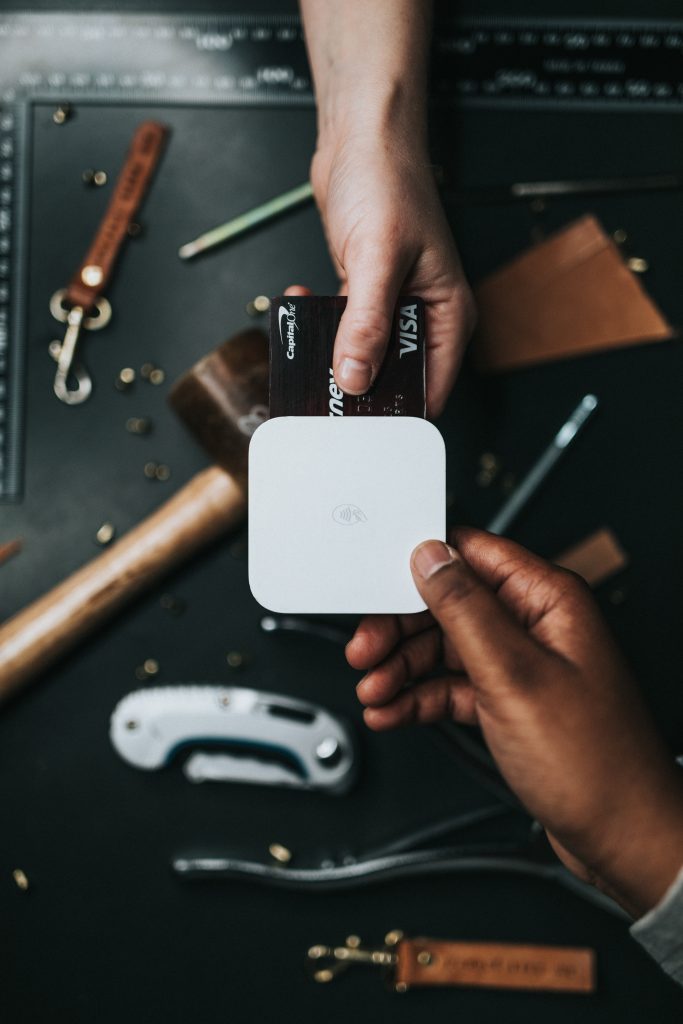 For me, patronizing black businesses is not a fashion, it is a necessity. I make a concerted effect to buy black throughout the year. Whilst visiting the U.S in 2015, I can recall being astounded to discover that the dollar spends just 6 hours within African-American communities, in comparison to 17 days in white communities,  19 days in Jewish communities and 28 days in Asian communities (US Bureau of Labor Statistics, November 2014). Although I do not have the figures for the UK, I can imagine the figures to be devastatingly worse largely due to communities being more integrated.

Buying black should be a commitment that we strive to accomplish wherever possible to ensure that existing black businesses and those with ambitions to establish businesses are able to prevail in these precarious times.

In the U.S, there have also been initiatives to encourage the retention of dollars within the black communities such as ‘The Empowerment Experiment’. The initiative founded by couple Maggie Anderson and John Anderson was initially planned to last a whole year. In 2020, the couple have now successfully dedicated themselves to spending solely with black businesses for over a decade from dry cleaners, grocery stores, restaurants and banking with a black bank.

Within the UK, organisers such as Centerprise in Dalston were trying to mobilise black economics for over 5 years with their ‘Word Power’ events. This was also illustrated in what Natural November did in the past and what ‘The Black Market’ which was founded by Black History Studies, Auntie Jean’s Afrikan Cultural Market in London, the Black Cultural Market which takes place at Europe’s largest black-owned arts centre, The Legacy of Excellence Centre in Birmingham, and Amazin’ Business Solutions (ABS)  in the Manchester region presently do. What is apparent is that our collective economic plight depends on supporting Black businesses.