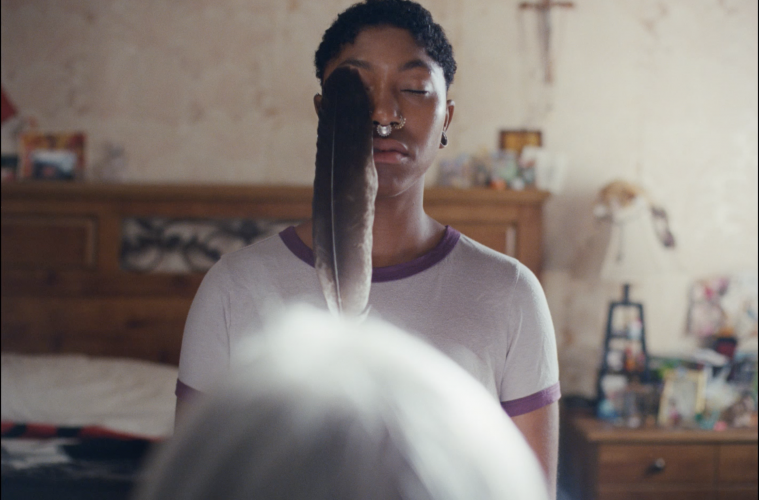 AG Rojas’ short Godchild is an impressionistic celebration of and rumination on the music and thoughts of four African American creative geniuses. The 10-minute film mixes a jazzy soundtrack and spoken quotations from ​Duke Ellington, Louis Armstrong, Miles Davis and John Coltrane with artsy imagery. Flute, saxophone and piano music are intercut with seascapes, a teenage Black male, flowers, rituals, musicians playing, lemon trees, a church, sculptress Maria Paz at work and stunning solar system scenery. Father-son relationships are also touched upon, as is the nature of freedom, referred to here as “libertad, liberté,” and by the African word “uhuru.”

Lofty notions such as: “Ideas? I’ve got a million dreams,” are spoken amidst a tapestry of effervescent natural and celestial beauty. Authors of some quotes are cited, such as Ellington’s musing that: “Every man prays in his own language. There is no language god doesn’t understand.” Maybe, but human beings may have trouble understanding this musical evocation of the eternal mystery of being, as who originated most of the quotations and the actual speaker are (the musician himself? if so which one? or voiced by actors?) are unidentified. It’s almost as if Rojas and ​co-writer Darol Olu Kae expect viewers to be clairvoyant.

Nevertheless, despite the fact that many audience members may be as baffled by this screen stream of cosmic consciousness as 1968 theatregoers were by the grand finale of 2001: A Space Odyssey as the secrets of the universe were unfolded, Godchild is a visionary, poetic picture well worth experiencing. As shots and sounds of Alice Coltrane’s home in Dix Hills, Long Island, where John Coltrane wrote “A Love Supreme” and of Grace Cathedral – where Duke Ellington performed his “Concert of Sacred Music” in 1965 – suggest, Godchild is a work of spiritual cinema. And in our troubled time, it can soothe seething souls.

According to press notes, “​Godchild was created as part of the Smithsonian [Institute’s] ‘Men of Change: Power. Triumph. Truth’ exhibit, which shares the essential stories of thousands of significant African-American men who are rendered invisible by a society that does not know how to see them. The exhibition highlights the journeys of revolutionary men – Muhammad Ali, James Baldwin, Ta-Nehisi Coates, W.E.B Du Bois, Kendrick Lamar. People who have altered history and culture through politics, sports, science, entertainment, business and religion. Achievements within the legacy and traditions of the African American journey: excellence in spite of society’s barriers. In heralding the contributions of notable men across decades, ‘Men of Change’ highlights deep parallels between the past and present.” (For more info see: https://menofchange.si.edu/.)

The press notes go on to say: “AG Rojas’ primary focus is on honoring marginalized peoples through the intersection between community, architecture and image-making. In 2017, AG and Kamasi Washington presented their contribution to the Whitney Biennial: a 30-minute audiovisual installation entitled ‘Harmony of Difference.’  Over the past 10 years, AG has directed music videos for Jack White, Spiritualized, Run The Jewels, Florence + The Machine, Kamasi Washington, Zack de la Rocha, and Emeli Sande, as well as global advertising campaigns for Nike, Apple, Adidas, and more. Most recently his Nike spot ‘Just Do It: Caster Semenya’ won the Bronze Glass Lion and was shortlisted for Film Direction at the 2019 Cannes Lions.”

Godchild is a stellar example of what is called “Overtonal/ Associational montage,” a film technique pioneered by early Soviet filmmakers such as Sergei Eisenstein. The website ClassicArtFilms.com defines this as “the cumulation of metric, rhythmic, and tonal montage to synthesize its effect on the audience for an even more abstract and complicated effect.” This film form is widely used in TV commercials, and one can see how Rojas’ background in advertising, as well as in music videos, came to bear in the stunningly beautiful audiovisual experience that is Godchild.

​Godchild is being released by Park Pictures, which was awarded the Palme d’Or for Production Company of the Year at Cannes Lions 2019. Godchild is ​available June 4, 2020, for an exclusive one-month run at https://www.godchild.film/.