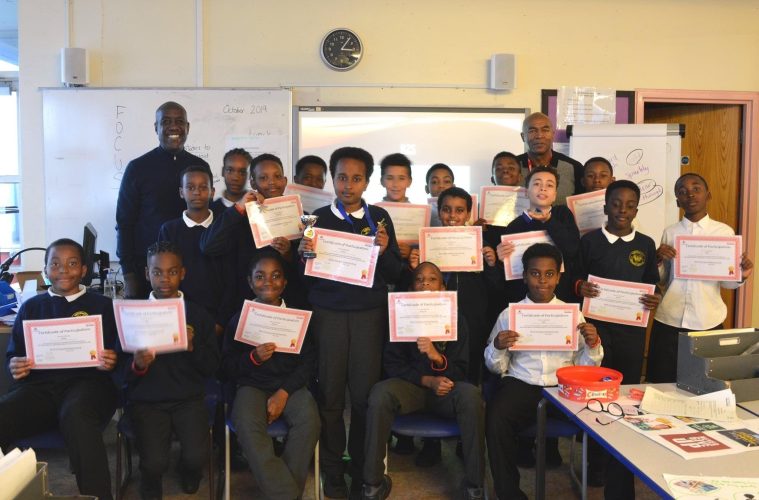 Role models can inspire a new generation of Young-Stars

In the last 5 years, discourses concerning Diversity, Equity, and Inclusion (DEI) has generated increased interest amongst organisations, corporations, and the government sector, particularly since the scornful assassination of George Floyd and subsequent proliferation of Black Lives Matter (BLM) over two years ago.

While senior politicians such as Jacob Rees Mogg ”don’t believe they [diversity officers] are doing anything useful’’  – organisations such as the charity Action for Race Equality (ARE) have valued and positioned DEI at the forefront of their engagement and consultancy work with organisations for over three decades. Some years before the lexicon of DEI began to slip off the tongues of HR staff more habitually.

Brianna Cyrus is the Routes2Success programme manager at Action for Race Equality (ARE) based in Kings Cross, London. Cyrus is also a qualified Secondary School Teacher of English and had been teaching for 8 years before her role.

The great vacation and new vocation

During her nearly decade spell as a teacher, Cyrus taught at several schools within the London region. Teaching at a school in Hertfordshire, where the mother of twins now resides provided a different challenge, though she preferred working within London schools.

Cyrus decided to vacate the teaching profession over 10 years ago.  She stated that she had reached a crossroad in her career where she said it was either she returned to London schools, or she quit teaching.

The year was 2013 and despite advancing to a middle leadership position where she was responsible for the pastoral care and academic progress of students, Cyrus was ambivalent about the profession. Witnessing the changes in the teaching profession from when she entered in 2005, Cyrus began seeking other roles outside of teaching.

An advertisement for a Programme manager with ARE which at the time was called Black Training Enterprise Group (BTEG) paved the way for a new chapter in the former teachers’ life. The role still allowed Cyrus to work with young people, a passion that instantly becomes evident after striking up a conversation with her.

The role with ARE involved working exclusively with Black boys and young men between the ages of 11 and 25. ‘’Working in London schools, you hear a lot about the failure of young Black boys in school and education and getting excluded from school and I thought this would be a nice role for me to be in’’ recalls Cyrus. The role was attractive because it gave Cyrus the autonomy that she was yearning for. This contrasts with the ‘’constraints of the school and what they want me to do’’ she argues.

In her new role, as manager of the Routes2Success programme with ARE, Cyrus became acquainted with the research that ARE had conducted concerning the criminal justice system, young Black males in education, the challenges in the labour market, entrepreneurism and understanding how to establish businesses. 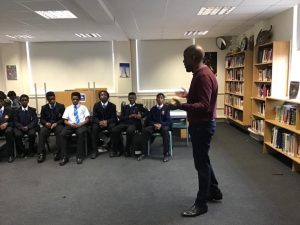 ARE’s research found that many of the young people they were working with lacked positive role models in their lives. Through interviews, the organisation also learned that a considerable amount of young people was not privy to career paths that they were of interest due to an absence of friends or family members who could best advise them about different sectors and how to enter them. Armed with the research findings instigated the foundations for the role model programme to become a reality.

The Routes2Success  role model programme was established in 2013 to ‘’provide positive role models for young Black males, but also to expose them to career opportunities that they may not have access to’’ says Cyrus.

Between 2013 and 2016, the Routes2Success role model programme was funded by The National Lottery Community Fund, which enabled the programme to operate across England, with most of its work clustered in London, Manchester, and Leeds.

Cyrus who is the niece of Margaret Noel, the founder of longstanding youth arts organisation Descendants said ‘’The schools who realise and understand the issues that those particular pupils are going through welcome us with open arms. And because we provide them with a little summary and report of the support that we give them and the outcome and the feedback from the pupils, we are always asked to come back and do more and word of mouth has encouraged other schools to take up the opportunities as well’’.

ARE has broadened its target group in recent years. ‘’Initially, when we started, it was for just young Black males and most of the work we did was in prisons and in schools’’ says Cyrus.

‘’They needed to be role models who looked like them, from different careers. They were saying that they were not necessarily encouraged in school to follow their dreams. They were kind of told to go down a health and social care route, or the kind of stereotypical careers they associate with Black and Asian females’

After several years of delivering the programme, many young girls would approach Cyrus and say ‘’We are hearing what you are doing with the boys and it is really good, but why can’t we do it as well? And I thought, do you know what? It is true. We do hear a lot about young Black males and the struggles that they go through, but it doesn’t mean to say that the girls are not going through similar struggles’’. 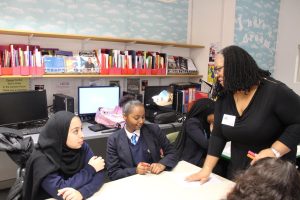 This inspired ARE to conduct a myriad of focus groups within schools.  Many schools were receptive to the research which was instrumental in establishing the type of support that the young girls required. The focus groups magnified the voices of not only African Caribbean girls but also highlighted the needs of Asian girls who wanted a similar programme. ‘’They needed to be role models who looked like them, from different careers. They were saying that they were not necessarily encouraged in school to follow their dreams. They were kind of told to go down a health and social care route, or the kind of stereotypical careers they associate with Black and Asian females’’ says the former secondary school teacher. Since 2016 ARE has extended its support for girls.

Working in prisons – An ‘’ ’eye-opening experience’’

During her nearly ten-year period with ARE, Cyrus says the work she has done in prison is her most ‘’eye-opening experience’’. Being a teacher for over 7 years, Cyrus was well accustomed to the culture of schools and college-age students, but the prison environment was startling. ‘’It was not what I expected’’ admits Cyrus.

”The support that they needed and were very open to was great. The fact that some of the role models had been through the criminal justice system themselves and could come and tell their story and tell the young people where they were now and how they managed to get out of the life of crime that they were in, I think it was just so inspiring for them and for other staff members that could see that there is another way forward. I think that was the most important message when we went to prisons’’ adds Cyrus.

The prison staff embraced the role model programme and long-term relationships were developed to foster greater impact on the young people who were incarcerated. Some prisons had only invited ARE to run annual, or irregular programmes such as Black History Month sessions, but after witnessing what ARE has to offer, the lifeline of the programmes continued. Unfortunately, due to a lack of funding, ARE no longer work within prisons.

In 2018 ARE began working with primary schools for the first time allowing their intervention programmes to have even further impact.  With funding from the Mayor of London, ARE’s core age group is now between the ages of 10 and 18 and Cyrus is determined to reinstate the successful programmes within prisons again.

Presently, the organisation is London based and they work within 9 London boroughs, but their vision is to revive national programmes across England.

Since the beginning in 1991, ARE has expanded significantly in their scope which has meant a name change was necessary. From the organisations inception until last year, they were known as Black Training and Enterprise Group (BTEG). 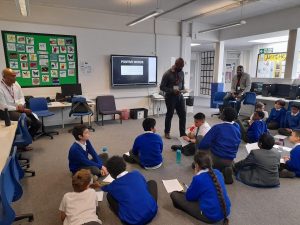 From left to right Routes2Success Role Models Anthony Henry, Bayo Igoh and Nathan Gray delivering a session at Mayville Primary School in Walthamstow to a group of year 6 children about the transition from primary to secondary school. (Photo Credit: Brianna Cyrus)

Reflecting on their previous name, Cyrus says ‘’It was interesting because I was probably one of the only ones within the organisation that were saying no let’s keep Black Training and Enterprise; I like it because it because it had the Black in the title, and I was like that explains what we did’’. Founded by Black and Asian people, ARE initially provided support to organisations, but as the years progressed, the organisation metamorphosed and now also provides ‘’specialist Black, Asian and Minority ethnic voluntary, communication and social enterprise organisations training’’ and tailored programmes for young people.

The Hertfordshire resident said ‘’We found that having the training title didn’t really explain what we are trying to achieve through our aims and objectives. The Action for Race Equality really says what we do’’.

School governor – ‘’Always something I wanted to do’’

In 2017, findings from the annual National Governance Association (NGA) survey suggested that out of 5000 school governors and trustees, 10% of respondents were under 40, and just over 1% were said to be under 30.

The mother of six-year-old twins is an advocate for more school governors from Black and global majority parents and currently sits on her children’s school governing body which includes an Asian and Black school governor. ‘’I realise as a Black parent how important it is to be involved in your children’s school life. For me, that was always something that I wanted to do once I had children. I wanted to become part of that school community and to not be an outsider because that is the only way you can really get to know what is happening in the school’’.

Brianna Cyrus is keen on engaging more with teachers and plans to establish social action and leadership programmes with young people. ARE’s demand for their services has increased exponentially but they have less capacity to deliver.

To ensure that these services not only remain operating but that the programmes can grow at the pace of demands, Cyrus is seeking committed volunteer role models and mentors from a myriad of professional backgrounds to help support Routes2Success. Volunteers must be at least 18 years old and will need to provide approximately 2 hours annually on 12 separate occasions to help inspire the next generation of young people through their sessions.

Travel reimbursements for volunteers are provided. ”All we ask is that they [volunteers] are from a Black and ethnic minority background. Everybody has got a story to tell. Young people just appreciate the authenticity of people and the generosity of people’s time when they [volunteers] come into schools” says Cyrus.

”At the end of 2016, we had about 60 volunteers; male and female, but after covid, with the current cost of living crisis, we are probably down to 20 now”.

Visit ARE’s brand new website for the latest job opportunities, or if you are interested in volunteering.