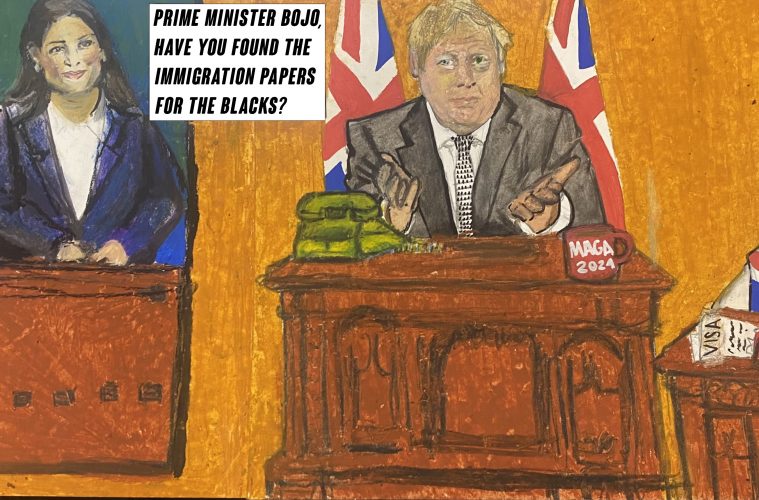 Following the Windrush scandal where the British government stripped British citizens born abroad of their citizenship, robbing them of their citizenship entitlements even for those who had come to England as minor children. The British government published the ‘Windrush Lessons Learned Review in March 2020,  that was supposed to put right the government racist deportation policy.  The British Home Secretary, Priti Patel declared the government’s commitment to facilitate a cultural shift within the Home Office in response to the review. Close communication with the Windrush Cross-Government Working Group led to thirty recommendations by Wendy Williams to be made of which a government press release in September 2020 claimed “raft of changes has already been made’’.  However, it would appear that fundamental changes have yet to occur. In November 2020 a senior Home Office employee Alexandra Ankrah resigned over accusations of racism, stating some of her colleagues ‘’betrayed a complete lack of humanity.’’  Ankrah expressed concern that some staff members who are now tasked to facilitate the compensation scheme had previously executed the hostile policies that caused so much agony and subsequently resulted in nine people dying before they received any form of compensation. In an interview with the Guardian Ankrah cited callous remarks by her colleagues such as

‘’People should be happy with whatever they get” and  ‘‘If they die without a will then too bad, they should have made a will.’”

Although a Home Office spokesman stated “We reject any suggestion that the Windrush compensation scheme is discriminatory or that it does not support victims..’’ this seems to contradict what so-called ‘’BAME’’  staff who were working on The Lessons Learned Review. Staff admitted being silenced by being rendered with non-speaking roles at meetings and receiving no invitation to workshops. Families and those directly impacted by the illegal deportations in an open letter expressed no confidence in the Home Secretary Priti Patel.

Yet a spokesman for the Home Office insists ‘’The scheme is more inclusive and open than any other compensation scheme in the UK.” If this is the case, one should be extremely concerned about the inclusivity of any compensation scheme the government has in operation that by virtue of the Home office statement would be less inclusive than their model example with all its flaws on full display. It should not be astonishing that the credibility of the Windrush compensation scheme was criticised by  Alexandra Ankah, a former barrister who served as the only senior Black staff member within the scheme.

Nearly three years after the Windrush Scandal came to the forefront of the public’s attention, the trauma that Ankrah argued has led to people being re-traumatised’’ is set to undergo another form of scandalous misalignment.  From 1 July 2021 ‘Migrant’ parents of British children who are denied settlement may result in thousands being deported. Though, according to Halcyon Chambers, such proceedings may be unlawful.

Targeted collective campaigning will be required to prevent thousands of Zambrano carers from being deported to countries in Africa the Caribbean or Asia should they be refused settlement after 1 July 2021.  Zambrano is defined as a person or persons from a non-EEA (European Economic Area) state whose residence is a necessity to permit a child or a dependent adult who is British to remain in the UK. Many Zambrano carers tend to be single or widowed mothers who have young British children and are fleeing from domestic violence.  In the past, parents could depend on former EU free movement regulations. Post-Brexit, saw the UK relinquish itself from the EAA agreement in January 2020.  Consequently, such persons now have to apply for settled status or pre-settled status which is determined by the Appendix EU of the UK’s immigration jurisdiction. This is the new requirement to live and work in Britain.

The situation cannot be remedied by simply applying for settlement under the Appendix EU. Last June, figures suggest that 61% of Zambrano applications were rejected when applying for settlement under the  Appendix EU. When it came to applications made from EU citizens, the number was substantially lower; less than 1%. –  Three months later, out of 1,730 applications made by people classified as Zambrano carers, the Home Office had rejected 1,090. Additionally, many lives were brought to an anxious standstill, with 1,540 applicants remaining outstanding out of the figure of 3,270.